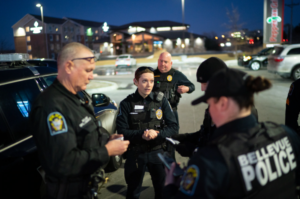 Officer Karen Wrigley’s pink nails tapped her body camera as she stepped from her cruiser into the cold. “You want to open up the door?” she asked the middle-aged Black man sitting in a parked minivan. “You’ve got an arrest warrant.”

The man had a criminal record for assault and other offenses, had run from Bellevue police before and was wanted for missing a court date for a traffic violation. He had no interest in returning to jail. “That’s horses—!” he cried, as Wrigley and her colleagues asked him 11 times over 15 minutes to exit the vehicle.

Wrigley, who is White, never raised her voice. She got on the phone with his lawyer through a cracked-open driver’s-side window — a window she had the right to bash in, given the circumstances. As reality set in, the man smoked two cigarettes and cursed his luck. He finally exited the car, remarking that he was freezing.

“Yep, us, too,” Wrigley said, handcuffing him. “Just to let you know, others aren’t going to be as nice as me.”

Wrigley, 35, is one of a slew of female officers hired over the past year and a half in this suburb south of Omaha, part of a deliberate strategy by Police Chief Ken Clary to reduce the likelihood of misconduct and excess violence on the force.