We focus on redistricting, voting technology, and vote verification to help ensure our democratic process is fair.

How do we make sure that voting, such a crucial part of our democratic process, is actually fair? This question became especially relevant during the 2020 federal and state elections that featured fewer polling places and more mail-in/absentee voting due to the coronavirus pandemic. The answer is to focus on the areas of redistricting, voting technology, and vote verification.

Voter apathy is a natural outgrowth of political races whose outcomes are already pre-determined because of gerrymandering. Why go to the polls if your vote won’t make any difference to the outcome? One solution discussed here: set up independent commissions to remove politics from the equation and determine fair redistricting. Progress is being made on this front: in November 2020, Virginia voters approved a referendum that put redistricting in 2021 in the hands of a bipartisan commission of citizens and legislators equally divided between Democrats and Republicans. Michigan voters had approved a similar bipartisan commission in 2018.

The voting process itself also must be transparent, with no unnecessary barriers. Voters should be confident that their vote counts, that the voting process is totally fair and equitable, and that every demographic is fairly represented. Voting technology, too, must be totally reliable, meaning the latest available digital and technology enhancements must have a dependable back-up system to ensure that every vote cast is verifiable.

Stay up to date on all things voting: the redistricting process, municipal elections, and much more.

Your vote matters. Your vote is your voice. It’s as simple as that.

Historically, voter turnout in the United States tends to be low, although in 2020, despite the coronavirus pandemic, there was a record turnout for the Presidential election as 66.7 percent of eligible voters cast their ballots in person or by mail and elected Joe Biden president. And those who didn’t turn out? “I felt like my voice didn’t matter,” the non-voters said. “Nothing ever gets done, anyway,” they said. Voting “doesn’t make much difference in my life,” they said. “I don’t trust the system,” they said, “and besides, all that gerrymandering makes my vote worthless.”

SC WIL remains concerned about gerrymandering, the practice of drawing district lines to favor one party in power, and is working to provide information and opportunities about equitable redistricting and voting process and equipment improvement.

Join the cause! Educate yourself and recruit friends to help support fair voting in South Carolina.

Let your representatives hear your voice! Let them know what you want to happen in South Carolina.

Learn how the Equal Rights Amendment would anchor women’s rights within the Constitution and let your legislator know you want the ERA passed.

Learn about the ERA 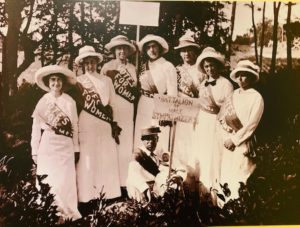 In 2020, we celebrated the 100th anniversary of the ratification of the 19th Amendment to the United States Constitution. This important milestone gives us the opportunity to reflect on the history of suffrage for all women.