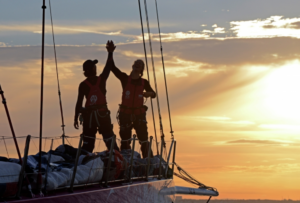 The Ocean Race, the world’s toughest test of a team in sport, is aiming for a 50:50 split of women and men competing in the round-the-world sailing fleet within the next three editions of the Race, building on its historical leadership position that has seen 136 women take part in the event since 1973.

The move aims for an equal number of men and women competing across the event, whether this is achieved through mixed crews or all-female teams. It is part of an unparalleled collaboration in sailing, with leading sustainability, diversity and sailing organisations, The Ocean Race, World Sailing Trust, The Magenta Project and PA Consulting, which builds on existing initiatives and introduces new pathways to open up sailing to women and young people.

Horizon, which encompasses roles across the sport – including sailors, boat builders, coaches, umpires and race officials – is launching following in-depth analysis of the state of gender equality in professional sailing by PA Consulting. The consultancy, which specialises in innovation and transformation, interviewed key stakeholders in the industry and found major barriers, bias and systemic issues that limit female participation in the sport.

Interviewee Dee Caffari, the first woman to sail single-handed and non-stop around the world in both directions, two-time competitor of The Ocean Race and Chair of the World Sailing Trust, said: “We all naturally trust the people we are used to sailing with, so it is difficult to break into a team. The wind and waves don’t care who you are, male or female, you’re a sailor.”

The insights echo the World Sailing Trust’s 2019 Strategic Review into Women in Sailing, which revealed that 80% of women and 56% of men think that gender equality is an issue in sailing, with 59% of women, compared with 14% of men, saying they had experienced gender discrimination.