She visited Ukraine to reconnect with her dad. Now she’s deploying aid. 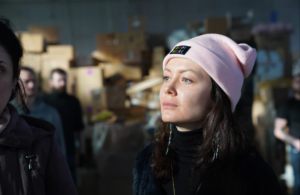 “Slava Ukraini,” says Zhanna Galeyeva as she watches a group of young girls busily drawing on a recent afternoon. “Glory to Ukraine.”

In an airy, sun-filled room of what used to be a school for the gifted, children are spread across several tables, creating messages of hope for front-line Ukrainian soldiers. Galeyeva crouches over the table as she praises each drawing. Some girls clutch stuffed animals donated by her team. Against the wall are other donated toys, baby food and diapers. More than 100 displaced children live in this school now.

Since March 1, Galeyeva has helped procure more than $200,000 in medical and food supplies for Chernivtsi’s two national distribution centers, three regional centers for war-affected children and three front-line medical centers. She has also started a nonprofit initiative called Bird of Light Ukraine, which she said has raised more than $1.2 million in donations of essential supplies — including ambulances, tourniquets, surveillance drones and truckloads of triage supplies.

Chernivtsi, a southwestern town of more than 260,000, is where thousands of displaced Ukrainians from the east are settling into apartments and support centers, and Galeyeva has become an active community organizer here.