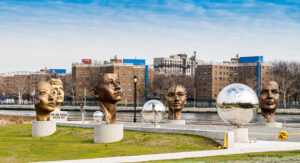 She was a journalist, traveler, suffragist, inventor, industrialist, and woman’s rights activist, but first and foremost she was a humanitarian. Her name was Elizabeth Jane Cochran, but she was better known by her nom de plume, Nellie Bly.

Born in 1864 in Pennsylvania, she began her career at age 19 as a journalist at the Pittsburgh Dispatch when she wrote a rebuttal to a misogynist columnist who argued that girls were meant for having children and keeping house. His piece was called “What Are Girls Good For?” Bly responded with “The Girl Puzzle,” signed by “Lonely Orphan Girl.”

In 1887, having moved to New York City, where she was turned away by numerous newspaper editors, she found the offices of The New York World, owned by Joseph Pulitzer, and promptly talked her way into an undercover assignment that led to her feigning “madness” in order to investigate what was happening to women at the Women’s Lunatic Asylum on Blackwell Island, now Roosevelt Island. Her book, Ten Days in a Madhouse, which first appeared in The New York World as a series, resulted in changes in asylum care. The experience changed Nellie’s life and led to her becoming the first female investigative journalist in America.

A year later, Bly determined to take a world trip that would beat Phileas Fogg, the protagonist of Jules Verne’s Around the World in 80 Days, on a global trip. Her editor liked the idea, and 72 hours later, in a traveling suit and clutching a small “gripsack,” she was on her way, beating the fictional Fogg’s record by completing her trip in 72 days, having traveled solo for more than 21,700 miles. The trip made her famous worldwide.

But Nellie Bly’s biggest legacy remains her commitment to humanity, social change, and women’s lives. Motivated by the cruel treatment of women she had witnessed during her asylum experience, she found her true calling. “I have never had but one desire and that was to benefit humanity,” she said.