WIL Listen Episode 6: The Future of Women in Leadership 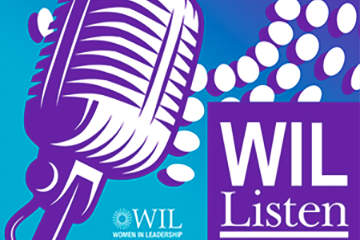 This month Stephania Priester, South Carolina Women in Leadership Outreach Coordinator talks with Jeni Atchley, President of the South Carolina Young Democrats and Sarah Jane Walker, Chairman of the South Carolina Young Republicans about their perspectives on where we stand on equality for women, how they have civil and productive dialogues in both their personal and professional lives with other women (and men) who don’t necessarily sit on the same side of the aisle, and why young women need to step up and take on leadership roles in their communities and in politics.

Jeni, Sarah Jane, and women of their generation may not face the same overt barriers that their mothers and grandmothers faced decades ago, but despite the changing times, there is still a significant gap in women’s pay equity when compared with white men and women continue to face many internalized barriers to leadership. We now have Kamala Harris, the first Black/Asian woman, as U.S. vice president, but women are still hugely underrepresented in federal, state, and local government, and on appointed boards and commissions. Young women are bringing their unique perspectives to challenge the way the good ‘ole boys have done things.

If you want to get involved in leadership, but the notion of partisan politics has you reluctant, opportunities abound for women to serve on appointed non-partisan boards and commissions that have a profound impact on the everyday life of your neighbors in your community. Use our Matchboard  database to find openings on boards and commissions where you live that fit your experience and interests.

Jeannette “Jeni” Atchley was born on a military base in Augsburg, Germany and was raised by her mother in California. Jeni and her siblings were in and out of the foster case system until she met her father when she was 8 years old and moved to Ladson, South Carolina. Jeni is a social worker at the South Carolina Department of Children’s Advocacy working with children with serious emotional or behavioral health diagnoses.

A native of Hickory, NC, Sarah Jane Walker fell in love with the fast-paced environment of campaigns and South Carolina’s unique flavor of politics during an internship in her freshman year at Erskine College. She has over a decade of experience working on political campaigns in a wide variety of roles. Since graduating from college and moving to Columbia, SC she’s worked on the ground with campaigns across the southeast and the country in capacities ranging from grassroots organizing to major donor management and everything in-between. Most recently she has combined her passion for politics with her love of all things tech in her current professional role crafting strategy for political candidates that engages voters and creates a community of activists. She has extensive digital, PR, and grassroots campaign experience working with candidates across all levels from city council to U.S. Senate and Congressional campaigns. Sarah Jane serves as the chairwoman of the South Carolina Young Republicans. In this role, she focuses on supporting local county Young Republican chapters in their mission of recruiting, training, and electing the next generation of Republican leadership in South Carolina.