Join us as we recognize and celebrate all the brave South Carolina women who have stepped forward to seek elective (win or lose) and appointive office. The Leading Women Dinner honors women who have blazed trails in civic leadership so that others may follow and builds a support network to encourage women to vie for civic leadership roles.

The event includes a V.I.P. reception for sponsors and special guests, open beer and wine bar, seated dinner, national keynote speaker, and awards for women in local, statewide, and appointive office that have devoted themselves to community service, demonstrated a commitment to working across party lines, and whose civic work has improved the quality of life for all South Carolinians.

Due to institutional, socio-economic, and cultural barriers that persist in South Carolina, running for elected office is daunting for even the boldest of women. Women comprise 51% of our State’s population, but hold just 17% of seats in our state legislature and are similarly underrepresented in municipal and local offices and on public appointed boards and commissions. Despite the challenges women face, this year at least 270 women filed to run for elected office from city and town councils to Governor with 175 women headed to the general election in November. 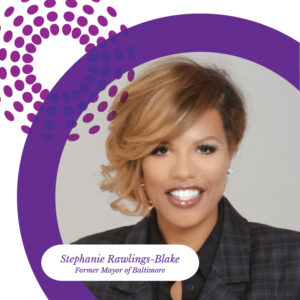 Stephanie Rawlings-Blake served as the 49th Mayor of Baltimore, MD from February 2010 until  December 2016. She was elected by her peers as the 73rd President of the U.S. Conference of  Mayors (USCM) – the first and only African American woman to hold the post. A long-time  active participant in national politics, Rawlings-Blake held the position of Secretary of the  Democratic National Committee from 2013- February 2017. She currently runs her own  consulting firm, SRB & Associates and has worked with national clients including Hudson  News, MasterCard, and Airbnb.

Stephanie also has served as a Political Contributor for ABC  News, and commentator on several networks including BBC and CNN.

Rawlings-Blake launched her political career when she became the youngest person ever elected to the Baltimore City Council at the age of 25. She won a citywide election to the  position of City Council President, serving from 2007 until early 2010, when she became  Mayor. Rawlings-Blake is passionate about public service, public safety, and supporting strong  sustainable cities. 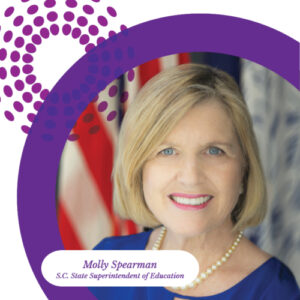 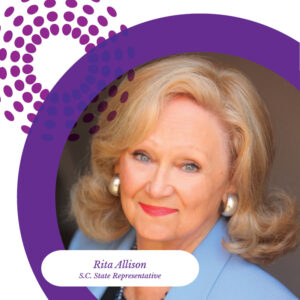 Representative Rita Allison defines herself by her blessings: her faith, family, friends, and opportunity to serve. She served a total of 28 years in the S.C. House of Representatives and founded the General Assembly’s Women’s Caucus.

That service includes leadership on the House Education and Public Works Committee, Ways and Means Committee, K-12 and Special Schools Sub-committee, House Operations and Management Committee, Joint Legislative Committee for Families and Children, Spartanburg County Legislative Delegation, and Assistant Majority Leader. She was a member of the Spartanburg District Five School Board of Trustees, ran for Lt. Governor, and served as an education advisor, and later as the Legislative Director to Governor Mark Sanford.

She is married to Ron Allison, former President of Tri-State Chemical Company and they have one daughter, Katina Allison Degler, son-in-law Ron and three grandsons, Nichols, Jacob and Wren. 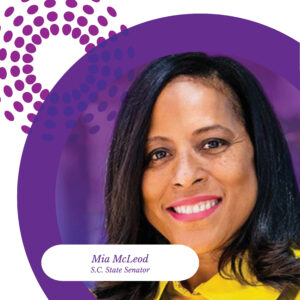 A trailblazing leader, Mia S. McLeod was the first woman to represent House District 79 and Senate District 22 and the first black woman ever to run for Governor of South Carolina.

Senator McLeod is known for her bipartisan work in and through state government. McLeod served S.C. State Representative David Beasley (later Republican Governor) as a page and worked for the SC Chamber of Commerce before earning her Juris Doctorate at the USC School of Law. Senator McLeod launched a statewide Violence Against Women initiative for Republican SC Attorney General Charlie Condon and was later appointed by Democratic Governor Jim Hodges to direct the State Office of Victim Assistance (SOVA). 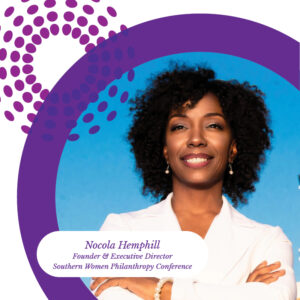 Nocola Hemphill was the first woman and Black candidate to run for Mayor for the Town of Winnsboro. She is the Founder and Executive Director of Southern Women Philanthropy Conference. Her work in the community is strengthening and educating rural communities to advance economic and political opportunities for the working poor, increase minority-owned businesses, mobilize disenfranchised voters, and advocate for mental health and environmental stewardship.

Photos from the 2022 Leading Women Dinner