Even After Albright, Foreign Policy Leaders Are Still Mostly Men 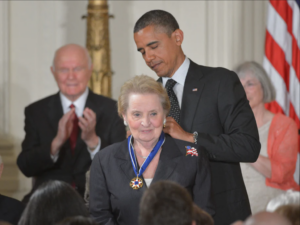 Trailblazing diplomat Madeleine Albright died last week. Albright is well known as the first woman to serve as the U.S. secretary of state. She shattered that glass ceiling in 1997, and in the past 25 years, many more countries have appointed women to serve in this role.

Yet, according to our data, in 2022 women make up only 20 percent of foreign affairs ministers around the globe. The lack of female leaders in this role has consequences for policy, public opinion and women’s broader access to power.

Shattering the glass ceiling
The secretary of state — or foreign affairs minister in other countries — oversees foreign policy and diplomatic relations. This is typically a high-profile executive branch position. In the United States, for example, the secretary of state helps shape U.S. overseas policy and is the first Cabinet member in the presidential line of succession.