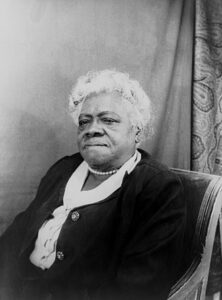 Mary McLeod Bethune is an inspirational woman who led an extraordinary life in service of bettering her community, and society beyond. She was born near Maysville, South Carolina as the daughter of two former slaves. Bethune began her education, graduating from Scotia Seminary, then attending Dwight Moody’s Institute for Home and Foreign Missions, before a career in teaching in South Carolina. She served in many organizations including founder of the National Association of Colored Women’s Clubs; president of the National Council of Negro Women; and vice president of the National Association for the Advancement of Colored People. She worked as a social advocate by leading voter registration drives, organized conferences for Problems of the Negro and Negro Youth and anti-lynching campaigns. Bethune also held positions in government that gave her a platform to do more for society. She advised many government officials and served presidents like Franklin Roosevelt and Harry Truman. The school she founded, Daytona Beach Literary and Industrial School, now named Bethune-Cookman University still honors her vision for social justice and maintains her legacy.