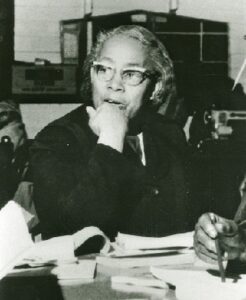 Septima Poinsette Clark is recognized as the “Mother of the Movement”. Being the daughter of a former slave, she always understood the importance of civil rights. She worked as a teacher in South Carolina for over 30 thirty years. In addition to this her work with the NAACP and YWCA in the fight against pay inequities between black and white teachers was successful for South Carolina educators. When a law was passed in South Carolina prohibiting teachers from participating in civil rights organizations, Clark remained strong in her resolve and continued working for the NAACP. After being fired from her teaching position she was hired as director at Highlander Folk School where she participated in and led workshops. Her Citizenship School curriculum ended up building up communities across the state by students starting up low-income housing projects, credit unions, nursing homes and more.