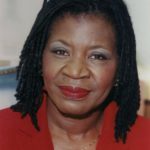 Maggie Glover was the first African-American woman to be elected to the SC State Senate. Born in Florence, Glover graduated from Fayetteville State University and received her Masters in Education from Francis Marion College. She was elected to the state senate in 1993 and was previously a member of the House of Representatives from 1989-1992.