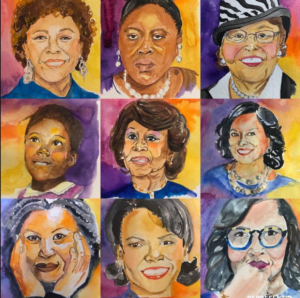 Weekend Reading on Women’s Representation is a compilation of stories about women’s representation in politics, on boards, in sports and entertainment, in judicial offices and in the private sector in the U.S. and around the world—with a little gardening and goodwill mixed in for refreshment!

While it’s fabulous to see so many more women being appointed to Cabinet and leadership positions in the Biden-Harris administration, there have been very few women in charge of economic decision-making according to this article in The Washington Post:

Janet Yellen breezed through her Senate confirmation hearing to be the treasury secretary last month. That is not surprising. Yellen is familiar from her recent stint as chair of the Federal Reserve and was an acclaimed academic economist before that. Even Senate Minority Leader Mitch McConnell (R-Ky.) referred to her as “qualified and mainstream.” The most interesting part of Yellen’s appointment may, in the end, turn out to be performer Dessa’s rap song homage.

But Yellen is the first woman to hold that position, and her uneventful confirmation makes it easy to lose sight of how novel that is. Only two other women — Canada’s Chrystia Freeland (2020-present) and France’s Christine Lagarde (2007-2011) — have held comparable positions in the world’s rich Group of Seven countries.

Here’s what you need to know about the slow rise of women to top finance positions.

Beyond the G-7, recent research, summarized in the figure below, reveals how few female finance ministers serve globally. We can see a jump in women’s representation in these positions around 1990, and again in the 2000s. But until very recently, women held less than 10 percent of the world’s finance minister positions. As the figure shows, that number trails women’s representation in other cabinet positions.

Slowly more women appear to be reaching positions in which they make decisions about nations’ economic lives.

The recent trend of more women in high-level, public-facing roles in economic governance is only partially attributable to the general move toward more women in power. Our research into women in central banking suggests that favorable macroeconomic conditions drive the rise.

Though women in power are not a monolith, I have been thinking a lot this week about the value of women leaders, and so I was glad to find this article by Phumzile Mlambo-Ngcuka, in The Independent at  the top of my Google Alerts:

From the swearing-in of US Vice President Kamala Harris to the Estonian Parliament selecting a female prime minister – champions of women’s rights have had much to celebrate in recent weeks. Yet despite women’s increased engagement in public life, equality remains a distant target.

At UN Women, we did the maths. If current trends hold, it will take approximately 130 years to achieve gender parity in heads of government. In other words, unless current world leaders prioritise the inclusion of women in decision making, no one reading these words will live to see women equally represented at the highest levels of government and public life. The world cannot afford to play out this timeline.

A sobering 119 countries have never had a female leader and, currently, only 22 countries have a female head of state or government. The barriers persist at all levels of government, across the public sector and civil society. A mere 14 countries have achieved 50 per cent or more women in cabinets (the Biden-Harris Administration just missed becoming the 15th when they announced that their impressive and historically diverse cabinet will include 48 per cent women). Similarly, only four countries have elected a majority of women in parliament.

Over the past year, we have seen women-led countries like Bangladesh, Germany and New Zealand fare better than many neighbouring nations in fending off coronavirus, while the lack of women in the public sector has left governments desperately ill-equipped to respond to the multifaceted crisis. We also witnessed how global prioritisation and cooperation can – swiftly – move mountains. As they did with vaccine development, countries must now fast-track actions to increase women’s participation in leadership and decision making.

So, what will it take to get there? The recipe for transformative change to advance gender equality starts with political will. Other key ingredients include funding for women in public life, gender-responsive institutions pushing for equal participation, and engaging men in recognising that gender equality benefits them, too.

Our analysis points to gender quotas as a successful tool and an essential step for countries striving to improve representation in elected office. Of the 23 countries that have reached or surpassed 40 per cent of women in parliament, more than two-thirds have applied gender quotas….There, we will call on all decision-makers to take measurable steps to increase the participation and leadership of women in all their diversity, including by applying quotas, appointing an equal number of women and men to all public positions, providing access to financing to support women’s campaigns, and eliminating violence against women in public life.

For this call to be heard, we all need to pay more attention. Beyond governments and legislatures, we need gender-balance among judges, CEOs and boards of directors. It is up to us as citizens to notice – and call out – who is missing from the table and who sits at the head.