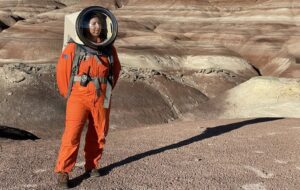 A new study of leadership behavior in men and women in a simulated Mars analog habitat has revealed that women may be better suited for long-term space missions.

Only three women have served as commanders of the International Space Station since it came online in 2000. Slowly, however, space is becoming more diverse with more women, including minorities, getting a seat on the rocket. Earlier this month, for example, Katya Echazarreta became the first Mexican-born woman to travel to space when she was selected to ride on Jeff Bezos’ Blue Origin. Echazarreta, who was supporting her family at 17 years old on a McDonalds salary, is working on her master’s degree in engineering at Johns Hopkins University. She has also worked at NASA’s Jet Propulsion Laboratory and hosts a science-focused YouTube series.

Then you have young women like Alyssa Carson, who NASA selected as one of only seven ambassadors representing Mars One, a mission to establish a human colony on the Red Planet in 2030.

“Although space is becoming more diverse, little is known about gender differences in leadership in isolated, confined and extreme environments,” said Inga Popovaitė, author of the study and sociologist at Kaunas University of Technology in Lithuania. “There is still a lack of data on women in space due to their low participance in both polar expeditions and space analogs.”

In her study, published in Acta Astronautica, Popovaitė analyzed commander reports from the Mars Desert Research Station analog habitat between 2009 and 2016. The Mars Desert Research Station (MDRS), located in Utah, is the largest and longest-running Mars surface research facility in the world. The project’s goals are to develop field tactics based on environmental constraints, test habitat design features and tools and assess crew selection protocols.

In total, Popovaitė examined 824 commander reports—277 written by women, 541 by men. In the 7 years studied, there were 27 women commanders and 49 men commanders during at MDRS.

Traditionally, male leads are seen as task-orientated while women are considered more sociable leaders. However, after conducting several types of analysis—including computational sentiment, qualitative study of the reports’ content and word frequency calculations—Popovaitė found that both sexes were equally focused on task completion.

The difference between them, Popovaitė says, is in how messages were communicated.