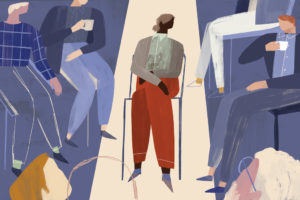 What would life be like if women ran the world?

In Nevada, the idea has been put to the test.

In 2019, it became the first (and only) state in the nation to have a legislature dominated by female lawmakers. Women now hold 23 out of 42 seats in the Assembly and 10 out of 21 in the Senate.

The research and anecdotal evidence is pretty clear: Partisanship and provincial regional agendas tend to trump gender when it comes to how lawmakers vote and legislate. But as a group, women often coalesce around certain issues, such as women’s rights and equality.

In Nevada, female lawmakers led the charge on new laws to strengthen the state’s domestic violence penalties, added permanent funding for rape kits and eliminated the requirement that doctors ask women seeking an abortion if they are married.

In five states — Nevada, Colorado, Oregon, Washington and Vermont — female lawmakers make up at least 40 percent of the legislature, and Maryland is almost there.

When women grow in numbers in legislative bodies, the change becomes structural. In the House of Representatives, for instance, a bathroom for women, as convenient and well appointed as the ones for men, was finally constructed near the House floor in 2010 (nearly a century after its first female employee showed up.) It took the Senate a few more years to expand its women’s facilities beyond a pathetic two-stall bathroom near that chamber. (Although that tiny Senate bathroom did have one advantage — female senators strategized over legislation while waiting in line.)

In 1993, women in Congress finally got to wear pants — yes it took that long — and in 2017, then House Speaker Paul Ryan lifted the ban on sleeveless dresses and open-toed shoes on the House floor.

But progress in making Congress look like the rest of the country — 50-50 male-female — has been much slower.

Jeannette Pickering Rankin became the first female member of Congress in 1917 — three years before the ratification of the 19th Amendment, which granted women the right to vote. In the decades that followed, women slowly trickled into Congress, usually filling the seats of their dead husbands. It wasn’t until the 1960s and ’70s that their numbers rose more steadily, and, at least among Democrats, they have continued to grow.

This 116th Congress boasted the greatest number of female members in history: 106 in the House and 26 in the Senate; although even at these historic highs, women make up only around a quarter of Congress over all and women of color only about one tenth.

In all, 35 new women joined Congress in 2019 — including two who won in special elections.

Historically, there has been some truth to the notion that women make better legislators because they work as a coalition. In large part, women in Congress have not had many other ways to get stuff done.

Because they were largely boxed out of good committee slots, 15 women in 1977 put together the bipartisan Congresswomen’s Caucus in the House, with the goal of advancing legislative issues outside the powerful committee system.

The caucus was successful in its quest for laws that protected victims of domestic violence and prevented rape victims from being asked in court about their sexual history, and in securing congressional passage of the Equal Rights Amendment (although it was never ratified). (One reason for its success? The caucus left abortion-related issues off the table, as divisive then, in the shadow of Roe v. Wade, as they are now.)

But as more women found their place in traditional positions of power, and as the partisan divide deepened, this caucus largely unraveled.

There is anecdotal evidence that women can work together to get things done. In 2013, for instance, a bipartisan group of female senators helped broker the deal that ended a government shutdown.

But for the most part, women largely vote with their party, not their gender.

Jennifer L. Lawless, a professor of politics at the University of Virginia, has noted, “The data simply do not support the notion that women are more likely than men to be ‘problem solvers’ who vote with members of the other party when it comes to moving the legislative process forward.” Further, there is mixed evidence that they advance bills more or less often than male colleagues.

But socially, it seems clear that women do depend on one another, breaching party lines. The women in the Senate have a bipartisan dinner once a month, a tradition begun by former Senator Barbara A. Mikulski, a Maryland Democrat.

Often female lawmakers will describe “that feeling that you get” being side by side with one of the few other women in a hearing room or important meeting, where they often seek one another out. As much as they treasure the bond, they will all welcome fewer opportunities to need it.