Earning It: Hard-Won Lessons from Trailblazing Women at the Top of the Business World by Joann S. Lubin 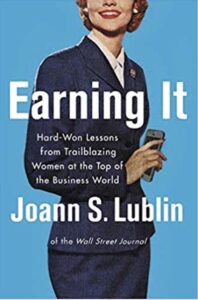 Among the first female reporters at The Wall Street Journal, Joann S. Lublin faced a number of uphill battles in her career. She became deputy bureau chief of the Journal’s important London bureau, its first run by women. Now, she and dozens of other women who successfully navigated the corporate battlefield share their valuable leadership lessons.

Lublin combines her fascinating story with insightful tales from more than fifty women who reached the highest rungs of the corporate ladder—most of whom became chief executives of public companies —in industries as diverse as retailing, manufacturing, finance, high technology, publishing, advertising, automobiles, and pharmaceuticals. Leaders like Carly Fiorina, former CEO of Hewlett-Packard, as well as Mary Barra, CEO of General Motors, and Brenda Barnes, former CEO of Sara Lee, were the first women to run their huge employers. Earning It reveals obstacles such women faced as they fought to make their mark, choices they made, and battles they won—and lost.

Lublin chronicles the major milestones and dilemmas of the work world unique to women, providing candid advice and practical inspiration for women of all ages and at every stage of their careers. The extraordinary women we meet in the pages of Earning It and the hard-won lessons they share provide a compelling career compass that will help all women reach their highest potential without losing a meaningful personal life. ~From the Publisher