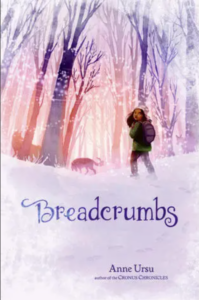 Available in the Richland Library collection in the following formats: print, eBook, and eAudiobook.

Once upon a time, Hazel and Jack were best friends. They had been best friends since they were six, spending hot Minneapolis summers and cold Minneapolis winters together, dreaming of Hogwarts and Oz, superheroes and baseball. Now that they were eleven, it was weird for a boy and a girl to be best friends. But they couldn’t help it – Hazel and Jack fit, in that way you only read about in books. And they didn’t fit anywhere else.

And then, one day, it was over. Jack just stopped talking to Hazel. And while her mom tried to tell her that this sometimes happens to boys and girls at this age, Hazel had read enough stories to know that it’s never that simple. And it turns out, she was right. Jack’s heart had been  frozen, and he was taken into the woods by a woman dressed in white to live in a palace made of ice. Now, it’s up to Hazel to venture into the woods after him.

Anne Ursu, acclaimed author of the Cronus Chronicles, has written a stunningly original fairy tale of modern-day America. Inspired by the Hans Christian Andersen story “The Snow Queen,” Breadcrumbs is in turn a remarkable middle-grade adventure, a dazzling ode to the power of fantasy, and a heartbreaking meditation on how growing up is as much a choice as it is something that happens to us.