Why Some Women Call This Recession a ‘Shecession’ 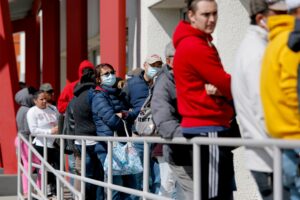 A majority of the jobs lost in April were held by women, a sharp reversal of gains in the labor market.

The unemployment numbers released on Friday confirmed what we had all anticipated: The economic crisis brought on by the coronavirus pandemic is staggering, or as one research analyst at Bank of America put it to The Times, “literally off the charts.”

The scale of the crisis is unlike anything since the Great Depression. And for the first time in decades, this crisis has a predominantly nonwhite, female face.

“I think we should go ahead and call this a ‘shecession,’” said C. Nicole Mason, president and chief executive of the Institute for Women’s Policy Research, in a nod to the 2008 recession that came to be known as the “mancession” because more men were affected.

Women of color fared worse, with unemployment rates for black women at 16.4 percent and Hispanic women at 20.2 percent.

According to an analysis by the National Women’s Law Center, this is the first time since 1948 that the female unemployment rate has reached double digits.

The April jobs represent an abrupt, disappointing reversal from a major milestone in December, when women held more payroll jobs than men for the first time in about a decade.

The biggest reason for these losses is that the industries hardest hit by the pandemic — leisure, hospitality, education and even some parts of health care — are “disproportionately nonwhite and female,” said Diane Lim, senior adviser for the Penn Wharton Budget Model, a nonpartisan research initiative.

For years, those industries had been the fastest growing parts of the American economy, Lim noted, driving the strong job numbers and growth. At the same time, male-dominated industries, like manufacturing, were shrinking.

As a result, women were doing better in the labor market before the pandemic.

Women “were making some real gains,” Jasmine Tucker, a researcher at the law center, said. “Now there’s this huge step back.” According to the N.W.L.C. analysis, this crisis has in one month wiped out all of the job gains that women had made in the past decade.

But female-dominated jobs, like hospitality or child care, tend to also be underpaid and undervalued, which means that many of the newly unemployed women now have less of a financial cushion to fall back on, said Mason, of the Institute for Women’s Policy Research. The problem is compounded for single mothers; a third of single mothers were already living below the poverty line and, since February, a million of them have lost their jobs.

All of the uncertainty only reinforces the need for more support and protections for women and families, Mason said, adding that she is somewhat encouraged by the action in Congress so far.

“Just a couple months ago, the things that we all said were impossible, we’re now doing, like basic income and paid sick leave,” she explained.