We Need Election Results Everyone Can Believe In. Here’s How 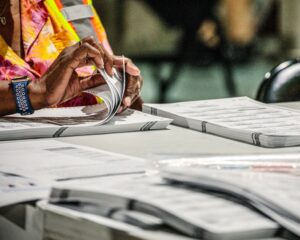 Since 2008, partisan distrust of presidential election results has been substantial. In 2016, only 43 percent of Democrats believed that the election was free and fair; now, only 30 percent of Republicans do. Each party’s supporters are more likely to believe that the vote was free and fair if they won, and those on the losing side are becoming more suspicious of the results. With a defeated president trying for weeks to overturn an election he has falsely called fraudulent, our partisan breach will be hard to repair.

But electoral reform can still provide a better foundation of trust. Two decades since the 2000 Florida recount debacle revealed the shoddiness of how America votes, we should be able to provide a straightforward, sensible answer to anyone who asks, “How do you know the results are correct?”

Yet, we still do not have nationwide standards and procedures to assure Americans that results are reliable. Claims of widespread fraud are false, but we can do much more to provide stronger answers to those who might want to question the process or the results.

The true scandal is that we know what we need to do and have even begun to implement reforms in many states, but we have not instituted the changes nationwide.

The basics come down to this:

Easier registration, with standardized voter databases, would keep voters from being incorrectly purged from the rolls — which can disenfranchise them — or being left on them when they move — which creates mistrust and suspicions of fraud.

The easiest method is called automatic voter registration: If an eligible citizen has an interaction with a government agency, like the motor vehicle department, she’s registered unless she declines, and the records are sent digitally to the registrar, which means cleaner, more up-to-date voter rolls. Nineteen states and the District of Columbia are already running such a system. This should be expanded nationwide.

We need to encourage states to exchange voter data so the records of people who move or die can easily be updated. The National Institute of Standards and Technology has been developing a common data format that would allow registrars in one state to exchange information with those in another state, greatly increasing the integrity of the rolls. A consortium of 30 states and the District of Columbia already has formed the Election Registration Information Center to make it easier for states to share data to both reach out to unregistered voters and to keep track of people who move or die so they are not wrongly kept on voter rolls.

Voting rights groups have long asserted that purges of voter rolls — often disproportionately affecting minorities or students, two groups who tend to vote Democratic — are a form of voter suppression. The Republican answer has been that they are only for maintenance, to ensure ineligible voters don’t remain on the books. If that’s the concern, the fastest way to fix all this would be to adopt these standards for registration and data exchange.

Republican officials across the country have also tried to make voting harder — especially in blue districts, particularly to obstruct Black voters. That strategy is not only deeply wrong, it’s backfiring. Voter turnout was higher this year for both Republicans and Democrats.

Still, we should not continue to rely on the tenacity of voters to overcome these obstacles. Research consistently finds that Black and Latino voters wait much longer in line to vote than their white counterparts, and this is simply unacceptable. There should be a sufficient number of voting booths everywhere so nobody has to wait in line for too long, and this should be a funded federal mandate.

But it’s not enough to have the potential to vote quickly if one doesn’t actually get to vote because of problematic record-keeping at the polling place. Electronic or paper poll books are used to check if a voter is registered to vote at a particular location. Nationwide use of standardized, secured electronic poll books, with a paper backup copy, would greatly help speed up voting, lessen suspicions of fraud and instances of disenfranchisement — and even make counting faster by reducing the need for provisional ballots when a registration is disputed. Increasing numbers of states already use a version of such digital poll books, but there needs to be a national standard for their certification and security, along with national funding.