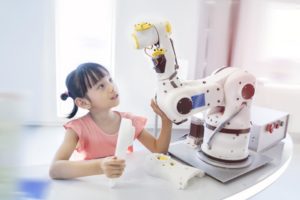 We decide on our careers long before we ever step foot in our workplace. We take cues from our family and dramatized media depictions of professionals who often look and act nothing like their real-life counterparts.

Therefore, to solve the gender inequality in technical roles, we need to kickstart our efforts in college or even high school – when students are open-minded, and there is still time to make real change. Because later in life, for every dollar men earn – women earn 81 cents.

One woman trailblazing change is Professor Daniela Rus, the first woman director of the Massachusetts Institute of Technology’s Computer Science Artificial Intelligence Lab, or MIT CSAIL for short. Daniela (who also started Dartmouth University’s Robotics Department), along with Professor Anna Baldycheva and Kate Berseneva from the University of Exeter, and Sophia Schteiner, head of partnerships and cofounder of STEMM Global, will host the first annual STEMM MIT CSAIL AI in Healthcare Summit. 2020’s summit on October 1-2. This summit will be entirely virtual and attract an international audience.

Unique to this summit is its combination of business and academia. After all, to make impactful change in the real world, we need the involvement and participation of both industry leaders as well as the brightest minds from academia. Together, Daniela, Anna, Kate, and Sophia have always been driven by this goal.

To understand what motivates these women to create and grow this global initiative, we’ll explore their personal journeys. In high school, Daniela enjoyed both math and physics. She said, “As the math we learned in school became more abstract, I realized that I wanted to do something related to STEM, yes, but also something with a physical component.” STEMM.AI cofounders Kate, Anna, and Sophia had similar experiences. Kate and Anna grew up with several generations of engineers and physicists in their families, with their parents openly discussing science, math, and programming around them. Their parents’ influence had a profound impact on their professional ambitions, which led Anna to establish her own research laboratory at the University of Exeter at the age of 28. And Sophia, the serial entrepreneur among the three cofounders, honed her scientific journalism skills by writing about her father’s geological discoveries, which led to her building her own PR firm, Schteiner PR, at the age of 22.

College years are our formative years, and it was when our three STEMM cofounders found their professional calling. As an undergraduate, Daniela was inspired to pursue robotics after attending a lecture by her PhD advisor, John Hopcroft, who notably stated, “many of the classical problems in computer science have been solved, and now is the time for grand applications in computing, such as robotics.” Daneila joined Cornell University to work with Hopcroft on the mathematical foundations of robotics.

At Cornell, Hopcroft asked Daniela to build a robot system to make and fetch coffee. Unfortunately, the only robot available was a huge Puma industrial robot. It lacked the body structure and the control agility to complete this task. Undeterred, Daniela  developed complex robotics algorithms and fine manipulation planning for dexterous manipulation. Daniela enjoyed overcoming this challenge and set herself upon a new one: adapting her coffee algorithm to instruct robots to move furniture. And the cherry on top was when Daniela programmed the old Puma robot arm to cut her colleague (Bruce Donald’s) birthday cake for a surprise birthday demonstration! Daniela’s passion and dedication to robotics grew through this collection of experiences.

Similarly, the three cofounders of STEMM found their inspiration through mentors or professors who encouraged them to pursue STEM. Anna Baldycheva is an Associate Professor of Electronic Engineering at the University of Exeter in the UK; Kate Berseneva is the Head of the STEMM AI Lab at Exeter; and Sophia Schteiner is the marketing and PR powerhouse of the team. Kate recalls seeing the wall of honor at the National Institute of Standards and Technology (NIST) in Washington, D.C., where she interned as a PhD student on theoretical physics, and telling herself that she “wanted to see more women among those brightest minds one day.”

Anna, the Professor in Electronic Engineering, says that “first year undergraduate students in engineering instinctively expect their engineering professor to be a serious, middle-aged male.” This inspired her to challenge that stereotype by becoming a successful young female engineering professor who can inspire a diverse next generation of engineers. She notes, “upon graduation, female engineers are sometimes considered by employers to be less professional than their male colleagues. The more girls trust in themselves to enter this challenging field, the more this narrow-minded historical precedent will become a thing of the past.”

Today, telepresence gives students greater access to tutors and teachers, while doctors treat patients thousands of miles away. Robots help with packing on factory floors. Networked sensors enable monitoring of facilities, and 3D-printing creates customized goods. We are surrounded by a world of possibilities. And these possibilities will only grow as we imagine what we can accomplish with advances in artificial intelligence and robotics.

Picture a world where routine tasks are taken off your plate: fresh produce shows up on your doorstep, delivered by drones. Garbage bins empty themselves, and smart infrastructure systems schedule automated pick-up. AI assistants—whether embodied or not—act as guardian angels, providing advice to ensure that we maximize and optimize our lives to live well and work effectively.

Daniela describes her role at MIT as “living her dream,” building robots that bring together the world of computation and the physical world of mechanisms and materials.