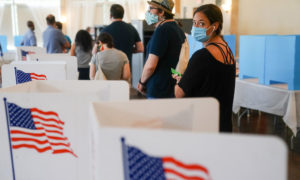 Georgia’s mid-June primary was the latest example of pandemic-induced voter suppression. Long lines at polling stations stretched for blocks and blocks as socially distanced voters waited for several hours to vote in person. In Fulton County, which includes Atlanta and is the state’s most populated county, some voters waited past midnight to cast their ballot.

Scenes like the one in Georgia—and Wisconsin before that—have ignited a national conversation about voting by mail. In response, President Trump has claimed that voting by mail “will lead to massive fraud” and favor the Democratic Party. Notably, Twitter even placed a fact-checking warning on one of Trump’s tweets about voting by mail, breaking with its previous practice of not calling out Trump’s falsehoods.

Vote by mail does not favor one party over another, a 2020 study from Stanford University found. Additionally, a recent survey by Pew Research Center showed that 70% of Americans favor allowing people to vote by mail. Even when broken down by political party, 87% of Democrats and 49% of Republicans favor expanding mail-in voting.

“Undermining voter confidence in the system is a form of voter suppression,” said Raúl Macías, counsel in the Democracy Program at the Brennan Center for Justice. “Millions of Americans have voted by mail safely and securely for decades.”