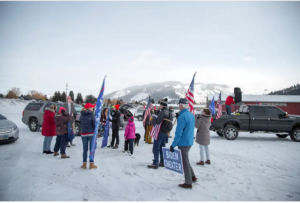 WYOMING — According to researchers from the University of Wyoming (UW), political polarization is having far-reaching impacts on American life beyond the political arena.

That’s one of the conclusions of a new scholarly paper by researchers from UW and five other universities across the country. The paper appears in the Journal of Public Policy & Marketing of the American Marketing Association.

“I think we’re all aware of how political polarization has affected our elections and system of government, but the impacts go far beyond the political arena,” said Dave Sprott, dean of UW’s College of Business and one of the paper’s authors. “Ultimately, polarization harms mental and physical health, financial welfare, relationships, and societal interests through its impact on psychology, marketing, and public policy outcomes.”

The researchers note previous research suggesting that political polarization in the United States is more pronounced now than in the past — at least among members of the nation’s major political parties — with Democrats significantly more likely to identify as liberal and Republicans as conservative. Additionally, consumers have indicated that they believe the parties overlap less now than they did in previous years, and the portion of people who hold extreme political opinions is increasing.

Research also has shown that political identities, such as Republican, Democrat, liberal or conservative, help determine people’s behavior, attitudes, and perceptions. Those identities can be reinforced by people selecting social groups with shared belief systems; consumption of media that only align with those beliefs; and even creation of a “group-specific shared reality,” the researchers wrote.

From a public policy standpoint, political polarization makes it more difficult for elected officials to effectively govern, the paper asserts. That’s due to a number of factors, including a lack of trust in scientists in policymakers and prevalence of misinformation.

“For instance, as society has become increasingly polarized, politicians’ objectives diverge and their animosity toward the opposition grows, thereby reducing opportunity for compromise,” the researchers wrote. “Partisan incivility is a major reason for failed dialogue: Uncivil exchanges result in disagreement and greater polarization regardless of the evidence presented.”

This political polarization is reflected in the marketplace, as consumers connect with brands that they perceive reflect their values and beliefs.

“In effect, activist consumers will increasingly expect brands to help spur social change, and will be more likely to respond to brand actions through a political lens,” the researchers wrote.

For example, they noted that the expressions of support for former President Donald Trump by the CEO of Goya Beans, a Latin food company, resulted in liberal consumers boycotting the company’s products and conservatives promoting them during 2020. Similar situations have arisen for companies including My Pillow, Home Depot and Chick-fil-A when their corporate leaders expressed support for conservative causes.

Even when companies aim to be apolitical, the nation’s polarized environment increases the chances that they will be viewed as being political, the researchers say.

“As the population becomes more polarized, initiatives that were previously viewed through an apolitical lens may be viewed as favoring one political identity over another, as a polarized population is more likely to view corporate actions through a political lens,” the researchers wrote.

Ultimately, according to the researchers, consumer welfare suffers because of political polarization in these areas:

— Finances: With political positions influencing decisions, people may sacrifice wages, lose out on jobs, make suboptimal purchases and disregard opportunities to save. For example, research has found that employees accept lower wages to work for politically like-minded entities, and people may select higher-priced products or ones that offer less-functional value.

— Relationships: Polarization has the potential to prevent neighbors or colleagues of opposing parties from developing friendships. This ultimately deprives individuals of intellectual diversity, among other things.

— Health: Obstruction of social relationships stemming from political polarization can cause both mental and physical harm. Additionally, “the politicization of COVID-19 prevention techniques has seemingly slowed their adoption and obscured dissemination of scientific facts, thereby amplifying the spread of a deadly disease.”

— Societal interests: For instance, beliefs relating to global warming, affirmative action, wealth inequality and gun control often tend to reflect individuals’ political affiliations rather than a deliberate processing of relevant information that results in evidence-based decision-making. “In addition, the broader negative impacts of these policy areas on society as a whole have the potential to harm individual mental and physical health over the long term,” according to the researchers.

The researchers suggest a number of potential measures to limit the effects of polarization, including reducing the spread of misinformation; using messaging techniques to try to bridge the different values of liberals and conservatives; and limiting the length of political campaigns.