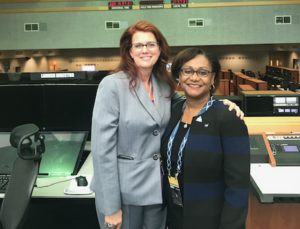 A few years ago, Vanessa Wyche was in the launch control complex at Kennedy Space Center when she saw a woman wearing a Clemson University lanyard attached to a NASA badge.

Despite studying at Clemson’s engineering department for a few years at the same time, the women had never met.

But their stories are remarkably similar. Wyche is the deputy director at the Johnson Space Center in Houston, and Blackwell-Thompson is the launch director at the Kennedy Space Center on Merritt Island, Florida. Both are working on America’s return to the moon, where astronauts will build a base to enable missions to Mars.

“Nobody is looking at what you look like,” Wyche said. “They’re looking at can you solve the problem.”

Neither of them were children who dreamed of space, but each was set on her path by a teacher in a public school in South Carolina.

For Wyche, that teacher was Mrs. Lane, a biology teacher at Conway High School. Lane saw a young woman with a curious spirit who liked to fix things. Wyche excelled in biology.

“You can do this as a career,” Wyche remembers Mrs. Lane telling her.

Both Wyche’s parents were educators, and education for their four daughters included learning how to fix a car and for their son, cooking lessons.

Her brother was the first in the family to go to Clemson; the others went to the University of South Carolina, Charleston Southern and Benedict College.

Wyche started out in biochemistry but quickly switched her focus to engineering.

“I found the true joy of learning how to solve problems,” she said.

She was one of the few women in engineering at Clemson in the 1980s. Some professors were not used to having women in their classrooms. But Wyche learned the great equalizer was being able to do the work. And hard work was not foreign to her.

She earned bachelor’s and master’s degrees and in 1987 headed for a couple of years to work on medical devices at the U.S. Food and Drug Administration in Washington, D.C.

She met the man who would become her husband, George Wyche Jr., and they moved to his hometown, Houston.

The pivotal conversation for Blackwell-Thompson was with a longtime physics teacher at Gaffney High School, Doc Wilson. She excelled in his class. Math just made sense to her. It was logical and could be used in a variety of subjects, Blackwell-Thompson said.

Wilson advised her to study engineering.

“What can I do with engineering?” she said.

As a senior at Clemson, she interviewed for a job testing software at the Kennedy Space Center for contractor McDonnell Douglas. She knew when she walked into what they call the firing floor — which is seen on television during each countdown — she wanted to work there.

She got the job. A month later, in 1988, Space Shuttle Discovery lifted off, representing a return to flight after the Space Shuttle Challenger explosion that killed the seven crew members, including Ron McNair, a fellow South Carolinian.

She was new, but she couldn’t help but see the pride and dedication of the team.

Blackwell-Thompson was involved in every shuttle mission after that in one way or another. She remembers driving into the space center on launch mornings and seeing the shuttle lit against the night sky. The service structure had been pulled away, and the vehicle could be seen clearly, 4 miles away.

“I’d just take a moment to look at how beautiful that space shuttle looked,” she said.

THE PATH TO ARTEMIS

The next NASA mission is Artemis, named for the Greek goddess of the hunt, wild animals and the moon and twin sister to Apollo. From Kennedy, Blackwell-Thompson will be launch director for the Artemis missions.

Wyche, as second in command at Johnson Space Center since 2018, is responsible for astronaut training and ensuring the spacecrafts are ready to fly.

Wyche went to work for NASA in 1989. Her first job was developing biomedical hardware to fly on the Space Shuttles. She moved into a number of scientific roles over the next decades, including developing hardware for the Russian Mir Space Station and training astronauts for shuttle missions and to assemble the International Space Station.