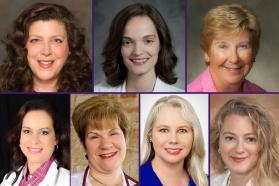 Women in medicine are creating change, blazing their own path in a historically male-dominated profession. But with the COVID-19 pandemic deepening the longstanding inequities and crises in the health care system, the need for women’s leadership has never been more urgent. Fortunately, the AMA’s leadership has helped fulfill that need with three consecutive female presidents—including the first Black woman to hold the office.

And now comes another first—all of the physicians serving as chairs of the AMA’s seven councils in the 2020–2021 term are women. Six of the councils submit reports directly to the AMA House of Delegates for consideration. These are all elected positions.

The seven women physician council chairs took time to discuss what this means for the AMA and how mentorship plays a role. Here is what they had to say.

It is a historic moment that all council chairs are women this year “because I started coming to the AMA when I was very young,” said Dr. Butler, an ob-gyn in Florida. “I remember when I would walk into the House of Delegates and see that there were not a lot of women or minorities seated as delegates.”

“Now it’s refreshing because when you walk into the AMA. You see people of all different ages, different stages in their medical careers, and all of us have something to contribute,” she said. “This is not to say that the perspective of older men is not appreciated, because they bring a wealth of knowledge as far as how medicine has changed and they have gone through a lot of changes that led us to where we are right now.”

“It’s important to see women in leadership that way it becomes commonplace so that, nationally speaking, we get more women appointed and elected to councils, more women that step up to be chair of boards, councils and organizations they serve on,” said Dr. Butler. “A woman’s voice is valuable, and we should be included, not just because we’re women, but because we have a lot of experience, a different perspective and we have a lot to offer just like men.”

The AMA Council on Constitution and Bylaws is responsible for reviewing rules and regulations for AMA sections.

For Dr. Geraci-Ciardullo, an allergist and immunologist in New York, public health has played a leading role in her life and career. From advocating for better air systems at schools for people with asthma to becoming part of a task force that trains physicians in recognizing bioterrorism threats and emergency preparedness issues, she has always been actively involved in public health issues. That led her to this council.

As an extension of that, Dr. Geraci-Ciardullo became part of the 2006 Influenza Planning Committee to create Pandemic Influenza Preparedness and Response Plans to implement throughout the state. Those same issues became apparent for the COVID-19 pandemic and she continues to work with the state to update the pandemic preparedness plan.

With support from Dr. Cea and encouragement to be part of the AMA delegation from New York in 2005, Dr. Geraci-Ciardullo enthusiastically accepted because, “I love the Council on Science and Public Health. I love their reports. I would read them cover to cover.”

The Council on Science and Public Health works to represent the AMA’s core belief that scientific evidence is the basis for improving the quality of patient care, promoting medical progress and enhancing the health of the public.