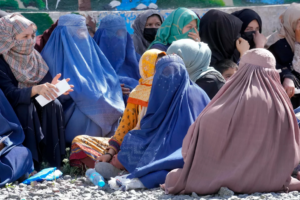 ISLAMABAD, Pakistan – Taliban officials announced that women and girls would be expected to stay home, and if they were to venture out, to cover in all-encompassing loose clothing that only reveals their eyes – preferably, a burka.

The restrictions on women’s movement and dress are the harshest that the Taliban have announced since they came to power in August. It suggested the increasing dominance of the group’s hard-line leaders, who appear to be behind the extended ban on most women and girls attending secondary school.

Saturday’s announcement seemed to confirm the fears of many Afghans that the Taliban remained unchanged after two decades out of power. When the Taliban last ruled — from 1996 to 2001 — they also enforced harsh restrictions on women’s dress and movement, and prevented most girls from going to school.

The news was met with dismay by some Afghan women.

“So much pain & grief for women of my country, my heart is exploding,” tweeted Shaharzad Akbar, the former head of a prominent Afghan human rights group, who now lives in exile.