The Superpower That Makes Female CMOs (And CEOs) Better 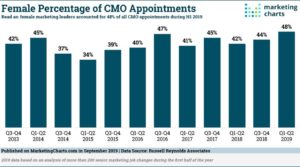 Compared to other executive roles, women fare quite well in marketing. In the two quarters of last year, nearly half of new CMOs were female.

This contrasts with the chief executive officer role, where last year females made up just 12% of new CEO appointments at the 500 biggest U.S. companies. The same report found that overall just 6% of CEOs in those companies were female.

The prevalence of female CMOs varies by industry. A Korn Ferry report showed that women made up only one out of five CMOs in the energy industry, but held 53% of those positions at financial companies.