The ‘shecession’: why economic crisis is affecting women more than men 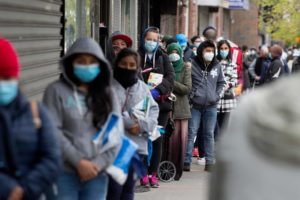 Denise Frederick hasn’t stopped working since the pandemic began. But the nanny and home carer in New York City has also seen her pay cut in both jobs and she is uncertain about how long she will have either with the coronavirus outbreak far from under control.

Like many women, the economic fallout from the coronavirus pandemic has hit Frederick hard. For the first time in history, the US is in a “shecession” – an economic downturn where job and income losses are affecting women more than men.

The family Frederick worked for left the city in the early days of the outbreak, but continued to pay her normally until last month when they cut her pay to hire a nanny where they are staying. They don’t know if they will return to the city before her contract expires at the end of the year.

Meanwhile, Frederick’s pay was cut at her home carer job, which she has commuted to on the bus and subway since the pandemic began and where she has to pay for her own personal protective equipment (PPE).

Frederick, a single mother, moved from St Lucia four years ago to fulfill a life goal: to put her 19-year-old daughter through college. “I keep saying to her, focus on school, let me figure out where the next meal is going to come from, let me figure out how the bills are going to get paid, because I don’t want her to get stressed out about me and then it’s affecting her grades,” Frederick said.

In the Great Recession, men lost twice as many jobs as women. But from February to May, 11.5 million women lost their jobs compared with 9 million men because of business closures intended to stop the spread of Covid-19. By the end of April, women’s job losses had erased a decade of employment gains.

The staggering figures have underlined the changing nature of the workforce and brought into focus the overlooked issues attached to that shift. Women, especially women of color, are more vulnerable to sudden losses of income because of the gender pay gap and are more dependent on childcare and school to be able to work.

C Nicole Mason, president and chief executive of the Institute for Women’s Policy Research (IWPR), said: “We didn’t do enough in the 2008 recession to make sure there was an even recovery, and what I am hoping this time around is that we learn those hard lessons and we make sure the communities who are most impacted, that there are targeted programs to make sure they are able to recover successfully.”