The pandemic didn’t create working moms’ struggle. But it made it impossible to ignore. 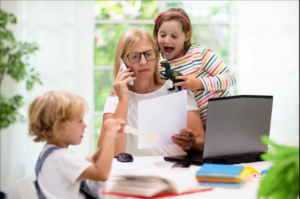 An old cartoon from 1976 has been circulating on social media recently, titled “My Wife Doesn’t Work.” In 20 panels, it follows the daily routine of a stay-at-home mom: At 7 a.m., she’s packing lunches; at 11 a.m., she’s running errands; at 2 and 3 and 5 p.m., she’s sweeping, ironing and dishwashing while a toddler tugs on her skirt. The titular panel comes at 1 p.m. when we drop in on her husband chatting with a colleague. “My wife doesn’t work,” he explains. The joke has one of two interpretations: either he has no idea how much work it takes to run a house because he’s not around to see this labor, or he’s aware of it but doesn’t count it as “work.” Maybe both.

It’s not surprising that in 2020, this cartoon is being shared with a covid-19 twist. “Now you can’t even schedule the 4 p.m. playdate,” I saw one mom lament; another joked about performing every task in the comic while additionally spending 40 hours a week in Zoom meetings. Last week in Britain, two different female television guests were interrupted on air when their children breached their home offices. Some commenters compared it to when a dad on the BBC was interrupted by his own toddler a few years ago; others noted that unlike that video, in which the man’s wife immediately skidded into the room to retrieve the kid, no spouse or nanny attempted to rescue these women. “Yes, you can have two biscuits,” one mom told her son, flushed and embarrassed as she returned to discussing U.K. politics.

The pandemic exposed a lot of fault lines in modern society, including one that runs through the work-from-homeplace: The lopsided division of off-the-clock labor among working spouses has never been more obvious, and it’s made two things clear: 1) we can lobby for equal wages, promoting women, and harassment-free workplaces, but progress toward true equality hinges on chores — the diapers and the dishes and the hundreds of other essential tasks that must be performed, even if we pretend they don’t exist; and 2) unless we want to deal a blow to women’s careers and mental health, we shouldn’t try to return to business-as-usual until we address that “usual” has been pretty sucky for working parents.

Consider the version of usual that we’re looking at in the coming months. School districts nationwide have presented patchwork plans of reopening — students will attend every other week, every third week, every Tuesday when the moon is full — with no regard to the parents who will have to stitch together these patches while working jobs that expect full-time commitment. Florida State University announced last week that employees would no longer be allowed to care for children while teleworking — an exemption it had allowed with the onset of the pandemic. Beginning in August, workers would have to — well, it wasn’t clear what they would have to do. Send their kids to schools that might not be open yet, I guess, or shove their 4-year-olds in the laundry room for nine hours with a Lunchable and a boxed set of “Paw Patrol.”

One pictured a dean somewhere, chatting with a colleague, oblivious to the labor he couldn’t see: “My employees don’t parent.” (After public backlash, the university appeared to walk back the dictum.)

Employees are always parenting now. Moms are always working now. Paid labor, unpaid labor, on-hours, after-hours. Deprived of school, they became teachers; deprived of summer camps, they’ve become counselors. Dads, too. Researchers at the Council on Contemporary Families found that the number of heterosexual couples who reported sharing housework had grown by 58 percent during the pandemic, from 26 to 41 percent.

The bad news is that still leaves 59 percent of couples who aren’t sharing responsibilities equally. Boston Consulting Group found women performing 15 more hours of domestic labor per week than their spouses; a United Nations policy brief on the impact of covid-19 on women warned that “even the limited gains made in the past decades are at risk of being rolled back.”