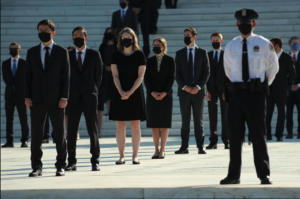 I’ve started getting the same phone call every couple of weeks at this time of year. It’s always from a woman at a top 10 law school. She is married, wants to have a family and plans to work in constitutional law. But there’s a problem. She’s butting up against a new trend for those competing to join the ranks of constitutional lawyers, judges and scholars: the assumption that those graduating from law school must complete multiple lower level clerkships before hoping to clerk at the Supreme Court.

In a process that already favored the wealthy and well-connected, this new hurdle may make it even harder for women who want to have children and those that take on substantial law school debt to make it into the upper echelons of the legal world.

At more than $100,000 a year, a three-year law degree at one of the nation’s top law schools will cost you more than the median home. But for the best, brightest, most dedicated—and most ambitious—law students, there has traditionally been another step after law school: the Supreme Court clerkship. Every year, each Supreme Court justice hires four law clerks to help with his or her work (retired justices can also hire a law clerk that they share with a current justice).

The process to become a clerk to a Supreme Court justice varies by chamber, but the reward for those who make it there is enormous. The standard hiring bonus for an associate coming from the Supreme Court is now $400,000 at the top law firms (plus the $190,000 annual salary). Former Supreme Court clerks are at the top of the list for judgeships later in life, and such a clerkship is all but required to teach at a top law school or to work in places like the Office of the Solicitor General at the Department of Justice. It is no coincidence that the last four justices to be confirmed to the Supreme Court all had previously clerked at the court themselves. And of the last 12 solicitors general of the United States, only three did not clerk at the Supreme Court.

Until the 1970s, most Supreme Court clerks came straight from law school. In that decade, it became more standard for graduates to apply to a SCOTUS clerkship after clerking for a lower court judge first. And since the mid-’90s, every Supreme Court clerk has already worked for another judge for at least a year.