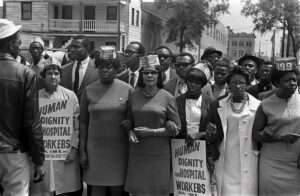 Black History Month is important, worth celebration, and simply put – much too short. What began as a week in 1926, grew into a month fifty years later, and it would be in everyone’s best interest to see the celebration and appreciation of Black history expanded into year-round opportunities to learn, teach, and uplift.

While we take Black History Month seriously as an organization and consider it a time to focus particularly on the wide-ranging contributions of Black women in leadership throughout South Carolina, we also take seriously historian Carter G. Woodson’s hope and vision of a future in which Black people are honored throughout the year instead of within the constraints of a finite period of time.

Woodson is often called the Father of Black History. In 1915, he founded the organization now known as the Association for the Study of African American Life and History (ASALH), whose mission is to “promote, research, preserve, interpret and disseminate information about Black life, history and culture to the global community.”

Woodson led his organization to sponsor what was called Negro History Week in 1926, planned during the month of February to coincide with the birthdays of Abraham Lincoln and Frederick Douglas – though his goal was not just to celebrate singular figures but to focus on the robust contributions to American society made by the Black community at large.

The idea was a hit. Negro History Week “inspired schools and communities nationwide to organize local celebrations, establish history clubs and host performances and lectures,” according to History.com.

The movement grew from there. Mayors across the country started to recognize and commemorate the week, and by the 1960s, it had expanded into month-long events on many college campuses. In 1976, thanks to a push from the then-late Woodson’s ASALH organization and advocates across the country, Black History Month was officially born and has been nationally recognized ever since.

But according to historian Daryl Michael Scott, “Woodson believed that Black history was too important to America and the world to be crammed into a limited time frame.” The goal of his work was to build toward a future in which Black history was taught and celebrated 12 months of the year.

So today, and all month, we recognize the history of this movement and the value of Black History Month – but we won’t stop there. We’ll continue building toward a society that celebrates the accomplishments, contributions, and lives of Black Americans, and the leadership of Black women, all year long.

To get to know some inspiring Black women who’ve led or are currently leading South Carolina toward a better future for all, read about Mary McLeod Bethune, Septima Poinsette Clark, Marian Wright Edelman, Michelle Logan Owens, Alfred Mae Drakeford, and so many others in our Groundbreakers series.