Home › Learning Center › ‘The First Lady’ reframes U.S. leadership through the eyes of the women behind the scenes at the White House

‘The First Lady’ reframes U.S. leadership through the eyes of the women behind the scenes at the White House 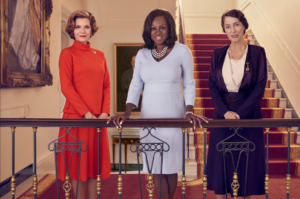 In a scene from Showtime’s new series “The First Lady,” Michelle Pfeiffer’s Betty Ford tells “60 Minutes” about her unlikely jump from Michigan homemaker to the woman behind the most powerful man in the U.S. in 1975.

“Washington can be an awfully tough town for a political wife, would you agree?” Boris McGiver, as MorleySafer, asked.

“Well I agree, but I had, you see, 26 years’ experience as the wife of a congressman,” Betty begins, referring to her husband, President Gerald Ford. “But I think a congressional wife has to be a special kind of woman.”

It is exactly these “special kind” of women, which also include first ladies Michelle Obama (Viola Davis) and Eleanor Roosevelt (Gillian Anderson), that the anthology TV series centers on in its attempt to reframe some of the most important female figures in White House history.

The first lady has “no position description, no statutory obligations and nothing codified in Congress,” said Anita McBride, the director of the First Ladies Initiative at the School of Public Affairs at American University. “But each woman feels a responsibility to use their experience, their background and adapt it to the role.”