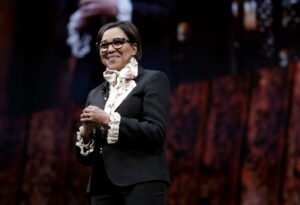 Good news/bad news. It’s a big morning for all of us at Fortune—today we launch our annual list of America’s largest companies: the Fortune 500.

It’s something of a Broadsheet tradition to check in on the number of companies in the ranking that have a female CEO. Historically, this has often been a depressing—but I would argue, important—exercise; one of the few yearly touch points that gives us a sense of how women are faring at the tippy top of the business world. Usually, the focus is whether that number went up or down, and by how much. This year, however, I’m happy to announce that it tells a more nuanced, and hopeful, story.

The 2021 Fortune 500 includes 41 companies led by women—an all-time record. Beyond that, it also includes the highest-ranked company ever run by a female CEO: No. 4 CVS Health, with CEO Karen Lynch at the helm. (The record was previously held by GM, which, under CEO Mary Barra, hit a high of No. 6.) Emma has written about Lynch and her historic status before, but checked in with the CEO to get an update for our new issue. Read her latest here.

Also setting an overdue record: Roz Brewer of Walgreens Boots Alliance (No. 16) and Thasunda Brown Duckett of TIAA (No. 79). Believe it or not, this is the first time the Fortune 500 has ever included two companies run by Black women. In fact, before Brewer and Duckett began their new jobs, only one Black woman—former Xerox chief Ursula Burns—had ever run a Fortune 500 business on a permanent basis. Burns stepped down from that role in 2017, and, with the exception of Mary Winston, who served as Bed Bath & Beyond’s interim chief for several months in 2019, Black female CEOs have been missing from the Fortune 500 ever since. Let us hope that two is just a start.

For all the news worth celebrating here—and there’s a lot of it!—I would be remiss not to mention that the list of female Fortune 500 CEOs is a lagging indicator. These are women who have spent decades honing their careers, all to prepare themselves to step onto this final rung in the corporate ladder. The titans now running Fortune 500 companies were once women early in their careers; they no doubt struggled with the same challenges that will be familiar to many of you—including the need to care for children or other family members while also excelling at work.

In the years I’ve been covering this beat, the trend has been moving in the right direction, with the number of women in top jobs at top companies creeping up year after year. But in 2021, as we continue to see more and more evidence that the pandemic has ravaged women’s careers, I fear we could be witnessing a turning of the tide. As even the deeply flawed systems that allowed some women to advance at work have crumbled, I wonder how many women might miss a critical rung on their own career ladder this year—and what that could mean for the future of corporate leadership.