Stop Saying Women “Dropped Out” Of The Workforce. We Were Pushed. 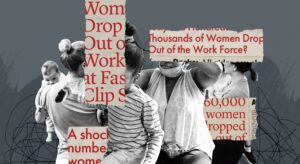 Last year, I pitched a panel to a conference on women and podcasting about the realities of working motherhood in America and the need to find more nuanced and thoughtful ways to cover it. I submitted the proposal while I myself was pregnant with twins, planning to fly across the country to attend said conference, and working on the second season of my own podcast. The organizers turned me down. “We just don’t think a whole panel on issues facing mothers would be relevant enough” was the explanation, despite the fact that 80% of women become mothers.

This is just one example of the gobsmacking anti-mom bias I’ve witnessed researching and reporting on motherhood. After all these years, the idea persists that mothers’ struggles to work and support their families are at best a sideshow. But what really revs me up, having spent my career in media, is that I can say unequivocally: We, the media, help perpetuate it.

Proof of our contribution may be on your screen right now. See the reams of content for mothers on lunch-packing strategies and easing tantrums, compared to the near nonexistence of political or financial content geared specifically to women raising children. See how almost every stock photo that runs alongside a story about working motherhood is of a pretty, white-collar white lady with a laptop and a baby on her lap, a position in which no one has ever completed work.

And I saw it in the late summer coverage of “the female recession,” the disappearance of close to a million women from the workforce in August and September alone. “Why Did Hundreds of Thousands of Women Drop Out of the Work Force?” asked The New York Times. “A shocking number of women dropped out of the workforce last month,” declared CNN. (Note: No working mother was shocked.) Bloomberg notified readers, “Women Drop Out of Workforce at Fastest Clip Since Virus Peak.” CNBC announced it as, “More than 860,000 women dropped out of the labor force in September, according to a new report.”

Here’s the problem: Framing women and mothers as “dropping out” fundamentally misunderstands what is happening to us and reinforces cultural ideas about motherhood that do not benefit anyone. Sociologist Caitlyn Collins, in her cross-cultural comparisons of motherhood, has found that, despite having deeply inadequate public support systems for mothers and families and a large gender wage gap, mothers in America blame themselves for the difficulties they face and see figuring out work and caregiving as solely their responsibility.

Mothers in Europe don’t grapple with the same feelings of guilt and inadequacy. Instead they have higher expectations that spouses, employers, and the government can and should support them in caregiving.

The phrase “drop out” feeds into this singularly American view of motherhood. It suggests a personal decision, and its unflattering connotations imply that those who leave work lack perseverance, grit, or the ability to work hard enough to succeed — all highly prized traits in our culture. This is just not an accurate description of what’s going on.

We are in the middle of a massive, nationwide recession that disproportionately affects women, particularly women of color. That 860,000 number doesn’t even capture how bad things are for mothers specifically. Further data revealed an even more devastating picture: There were 1.6 million fewer mothers in the paid labor force in the summer of 2020 than there were in the summer of 2019.

This happened because our federal government has failed to get this virus under control and has provided none of the desperately needed resources to help public schools open safely or creative efforts to provide child care or supervise virtual learning so parents can work. It has not bailed out child care centers or provided comprehensive job protection, adequate paid family leave plans, or child care subsidies. The working mothers who left the workforce are not just a bunch of people who made independent, personal decisions. Because we’ve been largely abandoned by our government, many mothers actually have no choice at all.

Allow me to suggest some more accurate language for news outlets to use. How about, “forced out,” “pushed out,” or, my favorite, “thrown out of a five-story window” of the workforce. Every news story about our professional demise should, from the headline on, report the most important fact: This is not about personal failing. Specific policy choices are directly responsible for women leaving jobs that provide for their families and careers they have spent years building, which they know (because the media have reported this accurately, over and over again) that they will almost certainly not be able to reclaim.

Katherine Goldstein is a journalist and the creator and host of The Double Shift podcast, a critically acclaimed, reported show about a new generation of working mothers.