Stacey Abrams on Minority Rule, Voting Rights, and the Future of Democracy 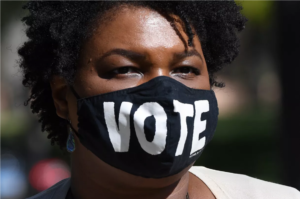 We’re one day away from the election, though who-knows-how-many days from finding out who won it. But there’s more at stake than whether Donald Trump or Joe Biden will be our next president. Democracy itself is on the ballot.

Democracy has, in particular, become Stacey Abrams’s animating mission. In 2018, Abrams lost the Georgia gubernatorial race by a razor-thin margin amid rampant voter suppression. Since then, as the founder of Fair Fight, she’s turned her attention to the deeper fight, the one that sets the rules under which elections like hers play out. In her recent book, Our Time Is Now: Power, Purpose, and the Fight for a Fair America, Abrams makes the case that the fight over democracy is the central question of our politics, with more power and clarity than any other politician I’ve heard.

In my view, Abrams is right. And so she’s exactly the person to hear from on the eve of the election. In this conversation, we discuss the GOP’s turn against “rank democracy,” the role of demographic change, how Republicans have cemented minority rule across American political institutions, why we potentially face a “doom loop of democracy,” the changing face of voter suppression in the 21st century, what a system that actually wanted people to vote would look like, why democracy and economic equality are inextricably linked, and much more.

One thing to note: You won’t hear Trump’s name all that much. It’s the Republican Party, not just Trump, that has turned against democracy, and that is implementing the turn against democracy. And it’s the Democratic Party, not just Joe Biden, that will have to decide whether democracy is worth protecting, and achieving. Democracy is on the ballot in 2020 and beyond, but it’s not just on the presidential voting line.

Listen to the podcast here.