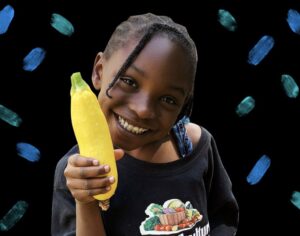 But after Kendall pulled the vegetables from the dirt, her great-grandmother — Laura “Kate” Williams — had an unusual request: Put the stems back in the ground.

After Williams passed away in 2017, Kendall and her family built a garden on the patio of their former South Fulton, Ga., home in her honor. The first thing they planted: collard green stems.

Sure enough, the family “started seeing other collards grow, and we were like, ‘Wow,’ ” said Ursula Johnson, 38, Kendall’s mother. “[Kendall] was like, ‘Okay, let’s do some more!’ ”

[ A harvest for the world: A Black family farm is fighting racism in agriculture and climate change]

That’s how Kendall’s fascination with farming began. Since then, it has snowballed: In her backyard farm, she grows sweet potatoes, collard greens, cabbages, broccoli, apples, pears, strawberries, tomatoes and blueberries, she said. In June, Ursula registered with the U.S. Department of Agriculture on Kendall’s behalf, making her one of the youngest such registered farmers, her family believes. That designation allows her to apply for loans and take part in conservation programs. (The USDA does not track the ages of registered farmers nationally, according to a spokesperson.)

In July, Kendall began selling affordable monthly baskets of food she grows in her garden, ranging from $5 to $20, to 18 local subscribers through her backyard farming business, aGROWKulture. Some of those subscriptions are sponsored donations that go to people in need, according to her mom.

Kendall’s status as an officially registered farmer isn’t just significant because of her age. As a Black girl, she’s also making strides in a field that has historically been male- and White-dominated. As of 2017, Black women made up only 29 percent of Black agricultural producers overall, according to the Department of Agriculture, whose researchers used the term “producer” in their data collection to refer to “all persons involved in agricultural production.”

The federal department also found that the country’s 48,697 producers who identified as Black constituted only 1.4 percent of the country’s 3.4 million producers overall. Texas was the state with the largest number of Black producers, while Georgia came in fifth.

Part of the explanation for the paucity of Black farmers is the historical theft and dispossession of their land, stemming from systemic racism and stretching back to American slavery. Black landowners in the South have lost 12 million acres of farmland over the past century, according to a 2019 report in the Atlantic.

Systemic racism also accounts for the difficulties Black farmers face in accessing resources to support their work, according to an analysis of USDA data published by Politico in July, which found that the Department of Agriculture granted loans that help farmers pay for land, equipment and repairs to only 37 percent of Black applicants last year, as opposed to 71 percent of White applicants. In September, the USDA launched an Equity Commission to address its role in “historical discrimination” against Black farmers.

For Ursula, this broader context was on her mind as she encouraged Kendall’s interest in farming by making it official.

“Here she is, learning as a Black girl, growing into a Black woman in this industry,” Ursula said. “I started the business so that if she decides down the line, ‘I want to take it to a different level,’ she already has it established — she just has to keep it going.”

Kendall is already expanding her efforts. In July, she launched a garden club that hosts monthly visits with local kids who tour the garden, learn how to grow their own food and do arts and crafts. In January, she’ll expand and formalize her garden club into a monthly 4-H program — the country’s largest youth development program, which offers leadership-focused activities for kids — through the University of Georgia Extension Service. Participants will follow a research-based youth gardening curriculum, according to Rachel Holland, Fulton County’s 4-H youth development agent. Kendall is also trying to raise $10,000 to expand her garden for the 4-H program (so far, she’s raised more than $3,500).

For Kendall, who is homeschooled, this social aspect has been among the best parts of farming. She’s been able to share her favorite part about farming (“playing in the dirt,” she said) and the hardest part (“the sun”) with the kids she meets. And she’s been able to fulfill what Ursula calls her “mission statement”: “Meet new friends, make new things and inspire other kids.”

Farming has also been a crucial part of Kendall’s education, Ursula said.

“She learned how to count from zero to 100 by counting her plants. When it comes down to science, she’s able to look out her window and comprehend what science is. We sit there and stare at bees pollinate,” Ursula said. “She’ll show me, ‘Hey Mom, we got a worm out here, we have a butterfly.’ … There’s so much to explore; we’re learning something every day just by digging in the dirt.”

Kendall has received recognition for her efforts: In September, she was awarded by a proclamation from South Fulton’s mayor, William Edwards, who designated Sept. 28 as “Kendall Rae Appreciation Day.” The mayor “was extremely impressed with her vision, especially being so very young,” according to Deloris Baskin, executive assistant to the mayor. By next year’s appreciation day, Kendall and her family are hoping to “get at least 1,000 kids out to plant a seed” through events at a local park to celebrate, Ursula said. (This year, they celebrated by going to Red Lobster.)

Ursula and her husband, Quentin, didn’t anticipate that farming would become a cornerstone of Kendall’s young life, given their own lack of experience with it. But “Kendall led us,” Ursula said.

Her best advice for other parents? When it comes to their kids’ passions, follow their leads.

“When you see your child interested and love to do something, go for it … hone in on what it is that they like, whether you get it or not, just try to make it work,” she said.

Kendall’s vegetable sales this Thanksgiving were proof of her farming success — and of her great-grandmother’s enduring influence: Ahead of the holiday, Ursula said, Kendall sold out of both her collard greens and sweet potatoes.