She Did Day Celebrate Centennial of 19th Amendment 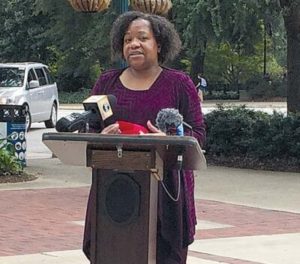 Two events were held downtown August 26 in celebration of National Women’s Equality Day and the centennial year of the Certification of the Ratification of the 19th Amendment. She Did Day Livestream was one of those events and is part of the Columbia City of Women initiative begun by Historic Columbia and WREN S.C.

Robin Waites, executive director of Historic Columbia, shared the history of She Did Day and the Columbia City of Women program, “She Did Day was established by proclamation in 2019 by the Mayor and city council to recognize the community’s strong legacy of remarkable women. A year earlier, spearheaded by former first lady Rachel Hodges, Historic Columbia and the Women’s Rights and Empowerment Network formed a collaborative initiative—Columbia City of Women with goals to celebrate the victories of our city’s women, connect through their stories, and make their presence felt more tangibly throughout our community. The initiative aims to connect residents to the rich legacies of our all-too-often undersung women leaders, whose contributions are woven into the fabric of this city. We believe in the power of representation and are committed to building a more equitable balance to that end.”

A special announcement was made at the She Did Day Livestream event by Ce Scott-Fitts, artist services program cirector for the South Carolina Arts Commission. Scott-Fitts said a new monument will be placed at the corner of Gervais and Main streets to “honor women who have changed the political and cultural landscape in Columbia.”

Commissioned by Historic Columbia, WREN S.C., and One Columbia, the monument will be in keeping with the mission of Columbia City of Women to promote those women whose achievements and impacts for the city have not been recognized and celebrated in the public sphere. Scott-Fitts said there are more than 6,000 pieces of public art representing historical figures in the United States and only 600 portray women.

Scott-Fitts said, “At a time when monuments are being reconsidered and in some instances removed from the landscape, the Columbia City of Women initiative will add to the narrative, providing much needed balance through a woman’s perspective. Greenville artist DeeDee Morrison, was selected by a committee with representatives from the S.C. Arts Commission, UofSC, Holder Properties, the City of Women steering committee, and the One Columbia for Arts and Culture public art committee. When we install and unveil the monument this fall, our hope is that work will challenge viewers to gain a better understanding of how women have contributed to the landscape of this community and generate conversation about how to ensure continued success and recognition for the future.”

She Did Day provided a socially distant way for the public to participate by offering a livestream video on the Historic Columbia Facebook page. It is still available at www.facebook.com/columbiacityofwomen/videos/319430532735320.

Following She Did Day Livestream, a second event was held on the north steps of the South Carolina State House sponsored by the League of Women Voters of South Carolina and the League of Women Voters of the Columbia Area. They held a silent vigil dressed in white with purple and gold sashes to commemorate the efforts of suffragists who stood at the gates of the White House in a silent vigil to ask for support from President Woodrow Wilson for the passage of the 19th Amendment to the United States Constitution. Those women suffragists, known as Silent Sentinels, led a silent vigil from 1917 to 1919, just one of the efforts of women who worked to win the right to vote.