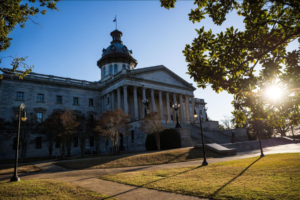 COLUMBIA — With almost half of all U.S. states allowing athletes to compete in middle and high school sports based on their gender identity, South Carolina is being pressed into a debate about setting boundaries for its own young competitors.

Legislation is pending in both chambers of the General Assembly that would limit participation on a sports team to a person’s biological sex — a move proponents say is necessary to ensure fairness for all, but one opponents argue violates civil rights and removes layers of privacy for an already vulnerable population.

“South Carolina has a proud history of cultivating talented and successful female athletes. For years, we have witnessed our daughters chase their dreams,” state Rep. Ashley Trantham, R-Pelzer, told a House panel during the bill’s first hearing on Feb. 23.

“Unfortunately, the next generation of female athletes in South Carolina may not have the chance to excel at those same sports,” she said. “We must act to restore a level playing field for women athletes.”

Trantham is lead sponsor of the “Save Women’s Sports Act,” which requires athletic teams to allow competitors based solely on their biological sex and authorizes legal action for people who are kept off a team based on another person’s gender identity.

It applies to all public middle and high schools and any private ones that may compete against them.

Trantham said the issue is about maintaining competitive balance, and that her legislation isn’t designed to step on the rights of transgender people.

“’We do need to think about how we can be inclusive with our transgender youth,” she told a House Judiciary subcommittee. Members adjourned after nearly 90 minutes of debate without a vote.

Among those speaking out against the bill are more than 40 doctors and medical students from across South Carolina, who all signed a letter urging lawmakers to reject the move.

“Transgender students, like other students, deserve the same chances to learn teamwork, sportsmanship, leadership and self-discipline, and to build a sense of belonging with their peers,” they wrote. “When we tell transgender girls that they can’t play girls’ sports — or transgender boys that they can’t play boys’ sports — they miss out, and being excluded can lead to harmful outcomes with regard to social and emotional wellbeing.”

Several current and former female athletes said competing against biological males put them at an inherent disadvantage in sports, including track and field and volleyball, though no examples were cited of such incidents occurring in South Carolina.

“Female athletes deserve the same opportunity as boys to excel. Allowing male athletes shatters those dreams and strips way so many opportunities we have worked years to achieve,” said Selina Soule, a Connecticut high school runner who said she lost several races to transgender opponents. Soule is set to attend the College of Charleston.