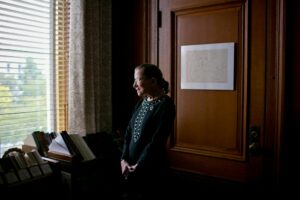 Ruth Bader Ginsburg, the second woman to serve on the Supreme Court and a pioneering advocate for women’s rights, who in her ninth decade became a much younger generation’s unlikely cultural icon, died on Friday. She was 87.

The cause was complications of metastatic pancreas cancer, the Supreme Court said.

By the time two small tumors were found in one of her lungs in December 2018, during a follow-up scan for broken ribs suffered in a recent fall, Justice Ginsburg had beaten colon cancer in 1999 and early-stage pancreatic cancer 10 years later. She received a coronary stent to clear a blocked artery in 2014.

Barely five feet tall and weighing 100 pounds, Justice Ginsburg drew comments for years on her fragile appearance. But she was tough, working out regularly with a trainer, who published a book about his famous client’s challenging exercise regime.

As Justice Ginsburg passed her 80th birthday and 20th anniversary on the Supreme Court bench during President Barack Obama’s second term, she shrugged off a chorus of calls for her to retire in order to give a Democratic president the chance to name her replacement. She planned to stay “as long as I can do the job full steam,” she would say, sometimes adding, “There will be a president after this one, and I’m hopeful that that president will be a fine president.”

When Justice Sandra Day O’Connor retired in January 2006, Justice Ginsburg was for a time the only woman on the Supreme Court — hardly a testament to the revolution in the legal status of women that she had helped bring about in her prejudicial career as a litigator and strategist.

Her years as the solitary female justice were “the worst times,” she recalled in a 2014 interview. “The image to the public entering the courtroom was eight men, of a certain size, and then this little woman sitting to the side. That was not a good image for the public to see.” Eventually she was joined by two other women, both named by Mr. Obama: Sonia Sotomayor in 2009 and Elena Kagan in 2010.

After the 2010 retirement of Justice John Paul Stevens, whom Justice Kagan succeeded, Justice Ginsburg became the senior member and de facto leader of a four-justice liberal bloc, consisting of the three female justices and Justice Stephen G. Breyer. Unless they could attract a fifth vote, which Justice Anthony M. Kennedy provided on increasingly rare occasions before his retirement in 2018, the four were often in dissent on the ideologically polarized court.

Justice Ginsburg’s pointed and powerful dissenting opinions, usually speaking for all four, attracted growing attention as the court turned further to the right. A law student, Shana Knizhnik, anointed her the Notorious R.B.G., a play on the name of the Notorious B.I.G., a famous rapper who was Brooklyn-born, like the justice. Soon the name, and Justice Ginsburg’s image — her expression serene yet severe, a frilly lace collar adorning her black judicial robe, her eyes framed by oversized glasses and a gold crown perched at a rakish angle on her head — became an internet sensation.

Young women had the image tattooed on their arms; daughters were dressed in R.B.G. costumes for Halloween. “You Can’t Spell Truth Without Ruth” appeared on bumper stickers and T-shirts. A biography, “Notorious RBG: The Life and Times of Ruth Bader Ginsburg,” by Irin Carmon and Ms. Knizhnik, reached the best-seller list the day after its publication in 2015, and the next year Simon & Schuster brought out a Ginsburg biography for children with the title “I Dissent.” A documentary film of her life was a surprise box office hit in the summer of 2018, and a Hollywood biopic centered on her first sex discrimination court case opened on Christmas Day that year.

The adulation accelerated after the election of Donald J. Trump, whom Justice Ginsburg had had the indiscretion to call “a faker” in an interview during the 2016 presidential campaign. (She later said her comment had been “ill advised.”) Scholars of the culture searched for an explanation for the phenomenon. Dahlia Lithwick, writing in The Atlantic in early 2019, offered this observation: “Today, more than ever, women starved for models of female influence, authenticity, dignity, and voice hold up an octogenarian justice as the embodiment of hope for an empowered future.”

Her late-life rock stardom could not remotely have been predicted in June 1993, when President Bill Clinton nominated the soft-spoken, 60-year-old judge, who prized collegiality and whose friendship with conservative colleagues on the federal appeals court where she had served for 13 years left some feminist leaders fretting privately that the president was making a mistake. Mr. Clinton chose her to succeed Justice Byron R. White, an of President John F. Kennedy, who was retiring after 31 years. Her Senate confirmation seven weeks later, by a vote of 96 to 3, ended a drought in Democratic appointments to the Supreme Court that extended back to President Lyndon B. Johnson’s nomination of Thurgood Marshall 26 years earlier.

There was something fitting about that sequence, because Ruth Ginsburg was occasionally described as the Thurgood Marshall of the women’s rights movement by those who remembered her days as a litigator and director of the Women’s Rights Project of the American Civil Liberties Union during the 1970s.

The analogy was based on her sense of strategy and careful selection of cases as she persuaded the all-male Supreme Court, one case at a time, to start raising the constitutional barrier against discrimination on the basis of sex. The young Thurgood Marshall had done much the same as the civil rights movement’s chief legal strategist in building the case against racial segregation.