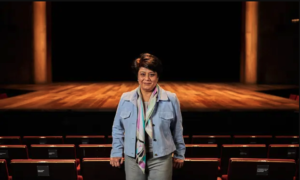 A banker and former adviser to Gordon Brown who was jokingly known as his “representative on earth” has been named as chair of the Royal Shakespeare Company.

Shriti Vadera is the first woman and the first person of colour to fill the role. She starts in August, succeeding Nigel Hugill who steps down after 10 years.

After a number of years at the Treasury and as a minister in Brown’s government, Vadera became the chair of Santander UK, the first woman to run a major British bank. Her term ended last year and she recently became chair of Prudential.

Vadera said it was a “joy and honour” to get the RSC job. “I grew up in Uganda and India, in a traditional community where expectations of the development of girls were narrow and strict. I read and imagined Shakespeare before I saw it performed and it opened up a different world, giving me the courage to aspire to possibilities that transformed my life.”

She said she had long been a supporter of the RSC. “As the RSC emerges from one of its most difficult years, responding to the global pandemic, I am excited to be supporting and championing the RSC as its new chair and to look to the future.”

Vadera and other candidates were interviewed by the RSC’s youth advisory board. They described their meeting with Vadera as “inspirational”.

Miranda Curtis, the RSC’s deputy chair who led the interview process, said: “In a highly competitive field, Shriti stood out for her professionalism and relevant experience, her profound passion for Shakespeare and the transformative power of theatre, her clarity of vision and understanding of the strategic challenges facing the RSC, and her personal warmth.”

While at the Treasury and in government, Vadera was seen as something of an enforcer. She became known as “Gordon Brown’s representative on earth” for her alliance with the prime minister.

She was known for her abilities to get things done. Alistair Darling was once asked what he would do with Britain’s bankers if they did not agree to lend more. “Put them in a room with [Vadera] and lock the doors for a couple of hours,” he replied.