Polarization: The Road to Nowhere 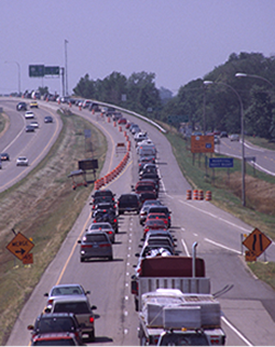 Should passing a bill to build roads and repairing bridges be the cause of media analysis and celebration?  That should be everyday business, but we know it’s rare in today’s government.  With the focus on partisan wins and losses, there’s never a moment to get work done, no matter how much it is needed.

In the governing bodies where polarization is most dramatic, the US Senate and House of Representatives, another divide is immediately clear: most lawmakers are male. If more women were elected, could we reach bipartisan agreements more easily and put aside grandstanding in favor of getting things done?

When we consider the socialization of women compared to men, the answer seems to be an obvious: yes. For many boys, sports are a zero-sum game, where one side can win only if the other side loses. Girls, by contrast, tend to play in a way that maximizes the cooperation of all the players.

As more women advance to positions of power in business, they clearly improve teamwork and collaborative efforts.  A study of what makes teams effective found a “direct relationship between the percentage of women members and performance. This correlation was not simply a diversity factor; rather, the more women, the better the performance.”

Women who enter politics seem to have different goals than their male counterparts.  While men often enter politics to gain power or raise their profile, women say that they choose that path to solve problems and contribute to the community—to change the world.

In our highly polarized Congress, some women are working the traditionally masculine power structure and playing by its polarized rules. One reason we see women taking on these behaviors may simply be that there are still far too few women holding seats.  World-wide, women hold 13% of the seats in legislative bodies (in the US, Congress is 24% female, British Parliament less than 30%, and Iceland 38%–only Cuba has 48%).

Congress is changing and will change more as more women are elected. The Brookings Institute cites studies showing that, already, “women are better at delivering federal funds to their districts and are more likely than men to contribute to a collegial work environment.”

If there is a hope for ending destructive polarization, some of it must come from the presence of more women in elected bodies.  When women are in strong positions, with the support of other women, they work not as combatants trying to win the day but as colleagues determined to solve problems and mend our broken system.