Record Number of Women Took Over Fortune 500 Companies in 2020 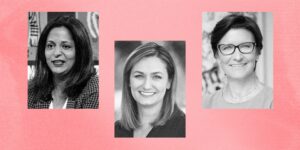 A record number of women took over as CEO in 2020 to help steer their company through an uncertain and volatile business environment prompted by the coronavirus pandemic.

Women are more likely to be elevated to positions of leadership in times of crisis and downturn, but are essentially taking on a higher risk for failure, according to a phenomenon known as the “glass cliff.” This year, more high-profile women than ever climbed their way to the top spot at Fortune 500 companies to take over from male predecessors.

Carol Tomé took over as CEO of UPS in June and has been leading the company through an unprecedented, pandemic-fueled surge in package delivery as more people opt to order online and stay home. Linda Rendle became the CEO of Clorox in September and tackled the challenge of keeping up with demand for her company’s sanitizing wipes and cleaning supplies amid the pandemic. Sonia Syngal was named CEO of Gap Inc. in March and tasked with strengthening the retailer’s portfolio during a time when it was forced to temporarily close stores due to quarantine orders.

There was also a history-making moment in the financial sector. Citigroup announced in September that Jane Fraser will become CEO in 2021, making her the first woman to lead a major U.S. bank. Lauren Hobart will take over the top job at Dick’s Sporting Goods in February.

Barring any new appointments, 10 of the women on the list will be leading retailers, a sector that has been challenged by the pandemic.

“It is common for businesses to identify that women are more likely to have crisis-relevant traits such as empathy and this has clearly manifested as an advantage in dealing with the pandemic, where female-led countries have shown lower fatality rates overall,” Allison Nolan, founder and managing director of Athena International Management Limited, told NBC News.

A 2019 study from S&P Global Market Intelligence found that public companies with women in the CEO spot or serving as chief financial officer were more profitable and had a stronger stock price performance, compared to companies with men in the top jobs.

“The female contenders for C-suite positions represent a relatively underutilized pool of talent, possibly attributable to a higher degree of scrutiny from the firms’ board of directors and consequently resulting in the tendency of females in C-suite positions to be more talented,” researchers wrote.

There have been some efforts under way to foster more representation at the executive level. Goldman Sachs announced in January it won’t take companies public without having at least one diverse candidate on their board. Earlier this month, Nasdaq sought permission from the Securities and Exchange Commission to require all listed companies to have at least one board member who identifies as female and at least one board member who is LGBTQ or a member of an underrepresented group. Under the proposal, a company must explain why it can’t meet those criteria or it will be delisted.

“We are taking the leadership here because there has been so little action on this front and we do think it’s an important thing for us to do — to create a more inclusive capitalist society and we think this is a step forward,” Nasdaq President and CEO Adena Friedman told CNBC.