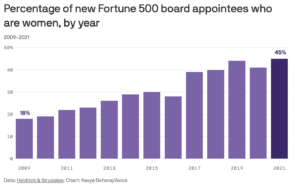 Women comprised 45% of all new Fortune 500 board appointments in 2021, a new high, while Black directors were 26% of new appointees, a tad lower than 2020 after a surge that year, according to a report released Wednesday morning by executive search and leadership consulting firm Heidrick & Struggles.

Why it matters: The yearslong push to diversify boardrooms intensified in 2020 after companies were spurred to action in the aftermath of the killing of George Floyd — and it appears to be paying off.

By the numbers: A record 43% of all new appointees to these boards were first-time directors — a key driver of diversity.

Background: Companies used to justify mostly white male boards by claiming there weren’t any other options.

What’s next: Hispanic and Asian or Asian American directors are still heavily underrepresented at 6% and 9%, respectively. “There’s work to be done,” says Taylor.