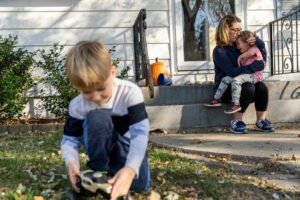 For millions of working women, the coronavirus pandemic has delivered a rare and ruinous one-two-three punch.

First, the parts of the economy that were smacked hardest and earliest by job losses were ones where women dominate — restaurants, retail businesses and health care.

Then a second wave began taking out local and state government jobs, another area where women outnumber men.

The third blow has, for many, been the knockout: the closing of child care centers and the shift to remote schooling. That has saddled working mothers, much more than fathers, with overwhelming household responsibilities.

“We’ve never seen this before,” said Betsey Stevenson, a professor of economics and public policy at the University of Michigan and the mother of a second grader and a sixth grader. Recessions usually start by gutting the manufacturing and construction industries, where men hold most of the jobs, she said.

The impact on the economic and social landscape is both immediate and enduring.

The triple punch is not just pushing women out of jobs they held, but also preventing many from seeking new ones. For an individual, it could limit prospects and earnings over a lifetime. Across a nation, it could stunt growth, robbing the economy of educated, experienced and dedicated workers.

nequality in the home — in terms of household and child care responsibilities — influences inequality in the workplace, Misty L. Heggeness, a principal economist at the Census Bureau, concluded in a working paper on the pandemic’s impact for the Federal Reserve Bank of Minneapolis. Without a more comprehensive system of support, she said, “mothers will forever be vulnerable to career scarring during any major crisis like this pandemic.”

The latest jobs report from the Labor Department showed that some of the damage was reversed last month as the service industry revived, nudging down the jobless rate for women to 6.5 percent, slightly below men’s. But there were still 4.5 million fewer women employed in October than there were a year ago, compared with 4.1 million men.

And according to the Census Bureau, a third of the working women 25 to 44 years old who are unemployed said the reason was child care demands. Only 12 percent of unemployed men cited those demands.

Laci Oyler has felt that pressure. Her husband, employed by a large printing company, was already working from home when the pandemic shuttered day care and schools in Milwaukee. But after two days of taking care of their two young sons, “he said, ‘Absolutely no way,’” Ms. Oyler explained. So she cut her weekly hours as a mental health counselor for Alverno College, a small Catholic institution, to five from 32.

In August, when she learned that public schools would continue to offer only online classes for the fall, Ms. Oyler decided she had little choice but to take an unpaid leave.

This month, she decided to resign.

“Work is so much more than what you’re taking home as payment,” Ms. Oyler said. “But when you look at that bottom line of risk versus reward, it doesn’t seem worth it,” she added, referring to the cost of child care combined with the possibility of coronavirus infection for her or her children.

As a licensed professional, Ms. Oyler does not expect to have difficulty returning to the work force when she is ready. But for most working women, dropping out to take care of children or other family members exacts a sizable toll, several studies have shown. Rejoining is hard, and if women do, they generally earn less and have less security. And the longer someone is out of work, the tougher it is to get back in.