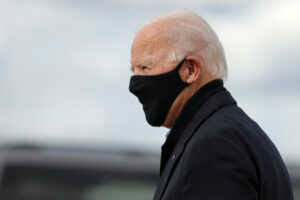 The Post/ABC poll showed Biden leading Trump among likely voters, 54 percent to 42 percent. The lead is consistent with other national polls conducted in recent weeks.

Biden holds a lead of 59 percent to 36 percent among women likely to vote; the two candidates are evenly split, each with 48 percent, among men. Biden’s edge among women climbs to 28 percentage point among suburban women.

According to the poll, Trump leads by 26 points among white voters without four-year college degrees, but Biden holds a 31-point lead with white college graduates.

The poll was conducted after the president disclosed his Covid-19 diagnosis. On questions dealing with the pandemic, 65 percent said Trump did not take appropriate precautions to reduce the chances of catching the coronavirus, and 6 in 10 say they do not trust the administration to provide complete and accurate information about his health. A total of 55 percent said they trusted Biden more than Trump when it came to handling the pandemic.