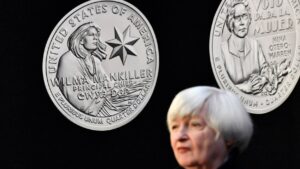 A new quarter unveiled this week honors Wilma Mankiller, the first woman elected principal chief of the Cherokee Nation and an activist for Native American and women’s rights.

Mankiller is the third woman to be featured on a US quarter, as part of the American Women Quarters Program. The initiative aims to celebrate the accomplishments and contributions made by women to the development and history of the US.

According to U.S. Mint, Mankiller played a pivotal role in advocating for and supporting the rights of American Indians. She was born in 1945 in Oklahoma’s Cherokee Nation but had to move after a devastating drought in the 1950s. Mankiller moved to a housing project in California where she grew up experiencing culture shock, exacerbated by poverty and racism.

She served as principal chief for 10 years and became the first women to be elected chief of a major American Indian tribe.