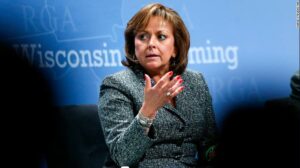 A group of veteran political operatives has launched a new organization to help recruit and support Republican women seeking to run for governor in 2022 and beyond, CNN has exclusively learned.

The group, called Right Direction Women, has set its sights on elevating GOP women to governor’s mansions across the country at a time when only three are currently occupied by Republican women: Kay Ivey of Alabama, Kim Reynolds of Iowa and Kristi Noem of South Dakota.

Chaired by former New Mexico Gov. Susana Martinez, who broke barriers as the first Hispanic female governor in US history, the organization boasts a leadership roster of women who have prior experience recruiting and advising female GOP officeholders. Its national co-chairs, Annie Dickerson and Marie Sanderson, have been involved in candidate recruitment previously — Dickerson as founder of the Winning for Women Action Fund, which has worked to elect Republican women to federal office since the 2018 cycle, and Sanderson as onetime policy director of the Republican Governors Association.