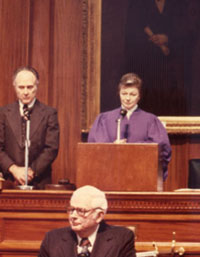 Ferdinan Backer Nancy Stevenson  served as South Carolina’s first woman lieutenant governor from 1979 to 1983, presiding over an all-male Senate. Upon her election, she noted her intention to provide active leadership and not defer to senior senators like Marion Gressette and Rembert Dennis. At the same time, the media reported her interest in a promotion to the office of Governor in 1982. As Lt. Governor, Stevenson spearheaded the Water Use Reporting Act, establishing a system to provide for and prioritize water usage in event of a drought.

The granddaughter of Charleston Congressman George S. Legare, Stevenson was educated at Smith College. She worked as a reporter for the New York Herald Tribune before returning to Charleston, where she became active in historic preservation, the theater, writing fiction, and politics. The Democrat represented Charleston in the South Carolina House from 1975 to 1978, where she was a lead sponsor of the Fiscal Accountability Act. After leaving politics, she founded and ran an art gallery in Georgetown, DC.

Of her public service, she once said, “I was watched far more closely than a man would have been. And watched in such a way that the least wrong move may have been jumped on and blown out of proportion.”