More Than a Celebration: The Elevation of Madam Vice President Should Be a Call to Action 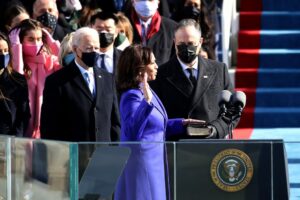 On January 20, Kamala Harris broke multiple glass ceilings when she became the first woman, Black person, and Indian American to assume the role of vice president of the United States. Each of these distinctions is worthy of celebration, but the combination of these milestones, in particular, is a landmark achievement that demands special attention. It is an achievement that in one oath-taking instant both illuminated and embodied the progress that the nation needs—and the call to action that now must follow. Namely, it served as an opportunity to redefine what leadership looks like; to reexamine how power is wielded and leveraged more broadly to inject equity within different settings; to reject the double standards to which women in leadership are currently held; and to reposition women of color as the critical benchmark on which to measure true progress. This breakthrough represents an enormous step forward—but to have real impact in the everyday lives of women, and indeed all people, it must be more than a celebratory moment. It must be a catalyst for change and the foundation for progress in every institution in the weeks, months, and years ahead.

As vice president, Harris will help unravel long-standing, narrow perceptions of who can be a leader. For too long, men—primarily white men—have held the reins of political leadership on the national level. The important but rare exceptions, such as Speaker of the House Nancy Pelosi, are far outstripped by the countless women who have been overlooked, ignored, or shut out of leadership positions for decades. Disrupting gendered perceptions of leadership and expanding opportunity in all segments of society are critical steps—not only for women today but also for young women and girls who deserve access to the same choices as young men and boys. This work should not be confined to government but must be prioritized in every setting to create equitable pathways to leadership.

This moment is also an opportunity to reexamine power relationships more broadly—specifically looking at who holds power, how power is leveraged, and who bears the brunt of how that power is used. The vice president will be uniquely situated as one of the most powerful people in the world, but she will be the exception and not the rule. By announcing the most diverse Cabinet in history, the new administration is conveying a long-overdue willingness to transform who controls the levers of power, and this transformation must extend into the private sector and across all levels of government. This work also must encompass rethinking how the vertical structures of power can be transformed into systems that hold leaders accountable for the use and misuse of power, to promote fairness and equity, and to inspire trust. Institutions’ credibility and effectiveness are directly connected to their commitment to elevating women and people of color to positions of power and to helping shift long-standing racial and gender stereotypes about who merits the mantle of leadership.

It is also essential that institutions and leaders at all levels reject the double standards that frequently hamstring women in positions of power. Women in leadership are often expected to conform to narrow, unyielding expectations and face judgment about their priorities, specifically whether they are focused on their home life, work, or both. They are often judged on factors—such as their hair, clothes, weight, demeanor, and temperament—on which men are not judged. Just as Michelle Obama had to navigate these competing expectations as the first African American first lady of the United States, Harris will confront a similar challenge from the unique setting of the vice presidency. These double standards occur at every level, with women of color often experiencing the combined brunt of multiple biases across race, gender, and ethnicity. From stereotypes about being angry, hot-blooded, submissive, or hypersexualized, too many Black women, Latinas, Native American women, and Asian American and Pacific Islander women have been critiqued or mischaracterized or lost out on opportunities because of misperceptions and standards that are applied only to them. Policymakers, employers, media commentators, and the public writ large must consistently push back against these types of limitations so that women are judged in the same manner as their male counterparts and have a fair chance to chart their own course.