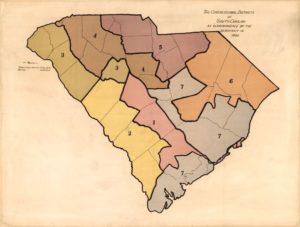 The 2020 U.S. Census is nearing its close, and next year, states will redraw electoral districts based on the size and characteristics of their new population count. Though it might not be as attention-grabbing as postal service delays, closed polling sites or purged voter registrations, this is another voting rights issue with a lot at stake.

That’s partly because the data gathered in the Census is likely to be questionable. It’s unclear how many people are going to be willing to open their doors to census takers in an age of social distancing, and undocumented immigrants may be even less likely to respond than in the past, due to President Trump’s attempts to use the survey to inquire about citizenship status. Moreover, as with any map, it matters who draws those new electoral districts. Many states use districting commissions that are appointed by governors or by the party that controls the state legislature.

This frequently results in electoral maps that are “gerrymandered,” or favorable to that dominant party. It’s a practice that goes back the early days of electoral districting; below, a graphic from a 2018 Bloomberg Businessweek article shows the basics.

Recent lawsuits filed by citizen groups have challenged gerrymandered maps in several states, most of them with districts skewed to benefit Republicans (who control most statehouses) but some to benefit Democrats. These legal battles took a big turn last year when the Supreme Court ruled that federal courts were powerless to intervene when politicians make maps that entrench their own advantage.

For the past year, state and local groups have been tackling the issue, proposing ballot measures to reform partisan districting in various ways. Meanwhile, some legislators are working on ways that could further tilt the power balance towards them. This year, pandemic-related delays in gathering signatures and legal hold-ups mean that several proposed ballot measures to create new independent voting commissions — such as ones in Oregon, Nevada, and North Dakota — likely won’t make it to voters this November as planned.