The week of Sine Die was eventful. 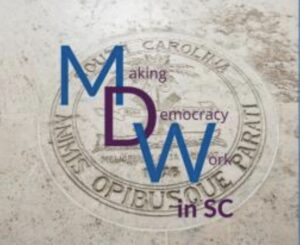 On May 12 Marci Andino, Executive Director of the State Election Commission (SEC), submitted her resignation effective the end of December 2021. South Carolina’s SEC was designed to be free of political influence, at arm’s length from pressures from officials who are elected through the processes that the agency oversees. The League appreciates Ms. Andino’s consistent respect for that independent role. Further, the 2020 elections were run well under difficult conditions, usually not a prelude to the departure of an executive.

We recognize that the SEC does not exist in a vacuum but it is constructed to protect to the extent possible its role as an independent agency serving voters and candidates impartially. The Governor’s statutory role in the SEC begins, and ends, with appointment of commissioners. It is not a cabinet agency answering to the Governor. Legislators have a legitimate oversight role. Accordingly, the House held oversight hearings in 2017 and Senate SEC oversight hearings have been underway in 2021. This is a transparent and accountable method to review agency activities, but the Senate committee has not completed its work.

The bill received third reading from the Senate on Thursday and was sent to the House. Normally the House either concurs with Senate amendments or refers to a conference committee. They did neither. In fact, a search of the Journal for May 13 shows no evidence that the House acknowledges that they received the bill. Among other implications, this means that selection of a new executive director of the SEC remains entirely in the hands of the SEC commissioners, without the additional voices that would be added through Senate advice and consent.

The role of the Executive Director of the SEC is a very important one, and anyone concerned about election nonpartisanship and integrity in South Carolina should follow this situation very carefully. South Carolina needs and deserves an SEC director supervised by SEC commissioners who are not subject to partisan influence. The search for a new director should be conducted accordingly, with a national search and a transparent and accountable hiring process.

Once received, the Senate did not ignore H. 3205 as the House did H. 3444, and it has been assigned to the Senate Judiciary Committee where it will await action in 2022. Organizing to prevent passage of this bill in the Senate must begin this summer, and we hope that all organizations receiving this update will agree and join in the effort to preserve our state and nation.