Kathy Hochul Is Standing on a Very High Glass Cliff 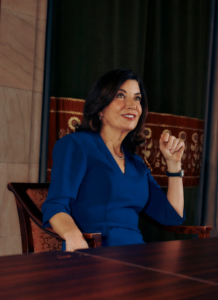 Kathy Hochul, the governor of New York, was seated at the center of an ornate dining table, nursing her throat with honey and lemon. It was late March, the height of New York’s contentious budget season, and she had been working the phones since sunrise. The governor was being pummeled in the press over proposed changes to a bail reform policy in the budget and was trying to find common ground. She’d consulted with Al Sharpton; she’d sought advice from Melinda Katz, the Queens district attorney. Twelve hours later, and with much else on her plate, she’d decided to convene a working dinner with top advisers.

The subject was Covid. Specifically, the state government’s response to it. Surrounded by her commissioners of health and homeland security, the head of her labor department and her counsel and her head of operations, she said she wanted a deep dive into everything that had happened — “the good, the bad and the ugly.” And she wanted it on her desk in two weeks. Looking at her transportation commissioner, Ms. Hochul added with a smile, “I’ll give you another week if there’s a snowstorm.”

It is safe to assume that in two and a half centuries of governors of New York, and nearly 150 years of executive meetings that have taken place in Albany’s regal but stuffy Governor’s Mansion, thousands of gatherings like this one had occurred. But there was one thing about this staff meeting that had almost certainly never happened until now, and it wasn’t a pandemic and it wasn’t the petite woman with a Buffalo accent at the center of it. It was that not a single man was present.

“Isn’t it crazy? Never,” said Elizabeth Fine, counsel to the governor. “And now it happens all the time.”